Pixar’s ‘Coco’—Drop in and meet the ancestors 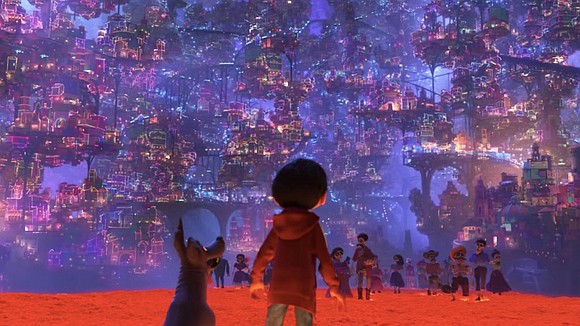 A new year is just a few weeks away. Your house will begin to fill with holiday relatives, and one of the best ways to keep the peace and make the holiday special is going to the movies. What to see? For a fun look at the Mexican culture, I suggest you choose “Coco,” which is now playing.

It’s a celebratory children’s film that highlights the Mexican culture, written and directed by Lee Unkrich—who is not Latino—marking “Coco” as the 19th feature from Pixar Animation Studios. A moment here. There is no need to keep banging the drum about the appalling lack of nonwhite creators and characters in children’s entertainment. It’s time to do something about that.

Another story for another time.

The main character, 12-year-old Miguel Rivera (voiced by Anthony Gonzalez), is passionate about learning to play the guitar. Unfortunately for him, he belongs to a family of humble shoemakers to whom music has been forbidden for generations, ever since his great-great-grandfather walked out on his wife and daughter to pursue a career as a singer.

Naturally, Miguel has taught himself to play the guitar and spends every free moment studying the work of local singing legend Ernesto de la Cruz (Benjamin Bratt)—a man who died young and handsome, leaving behind a trove of classic songs and black-and-white films. Miguel has memorized every line, look and lyric, singing along with his best-loved ballad, “Remember Me,” on his handmade instrument.

Miguel’s mission is to persuade his family to change their minds about his musical talent and his life’s path. Music is his destiny. While getting ready to perform in the annual Día de Muertos talent show in the town plaza, his carefully hidden guitar is found and smashed by his loving Abuelita (Renee Victor). This part I don’t understand. Our people live and love music. It’s a part of our DNA, I am pretty sure.

Determined to let the music out, Miguel sneaks into Ernesto de la Cruz’s mausoleum on Día de Muertos and steals the star’s prized guitar, unleashing a curse that forces him to travel to the Land of the Dead, where he must seek his family’s forgiveness, as well as their blessing, before being allowed to return home. Here the story gets sketchy and thready. Wait. It’s a children film, so go with it, please.

After reuniting with his relatives (who live on in skeleton form), Miguel is torn between obeying his family and trying to find Ernesto, who he’s come to believe was the very musician who abandoned his family so many generations before. For Mexican audiences, the cultural iconography of the Land of the Dead is a nod to the customs and folklore of Día de Muertos (Day of the Dead).

The film’s elaborate prologue unfolds across a series of papel picado banners (the cut-tissue-paper streamers that line the streets during times of celebration), and the spirit animals inspired by the country’s colorful folk-art sculptures keep the dead company. It also provides an opportunity for Miguel’s street-dog sidekick, Dante, to accompany him on his journey.

Dante—one of Mexico’s oldest breed of dog—might be the best character in the film. His googly eyes and lolling tongue provide the best comic relief, and he’s great at rescuing his buddy.

There is also a skeletal con artist, Hector (Gael García Bernal), who comes to Miguel’s assistance, hoping that by helping the boy back to the real world, he might be able to cross over as well.

“Coco” is entertaining with a lot of child-inspired skeleton gags that make you chuckle, and the music is truly entertaining.