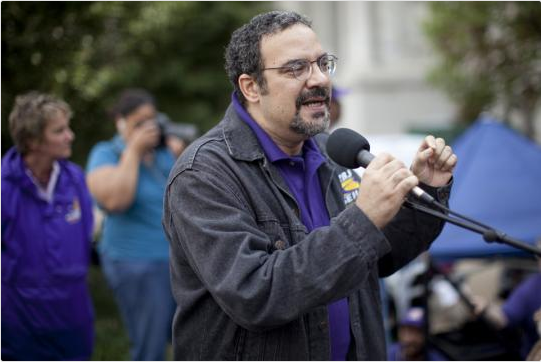 According to ICE, “Operation ‘Safe City’” specifically targeted individuals who violated immigration laws and prioritized those with criminal convictions, those with pending criminal charges, gang members, gang affiliates and those who re-entered the U.S. after deportation. ICE officials claim that those with active Deferred Action for Arrivals protection weren’t targeted.

“Sanctuary jurisdictions that do not honor detainers or allow us access to jails and prisons are shielding criminal aliens from immigration enforcement and creating a magnet for illegal immigration,” said ICE Acting Director Tom Homan in a statement. “As a result, ICE is forced to dedicate more resources to conduct at-large arrests in these communities.”

ICE’s actions drew the ire of 32BJ President Hector Figueroa, who said his union will fight back against the agency’s tactics, which he called divisive.

“As a labor union representing thousands of immigrant workers in New York, and even more across the country, we are greatly disturbed by the recent raids by U.S. Immigration and Customs Enforcement that targeted sanctuary cities, including New York City,” said Figueroa in a statement. “We will continue to push back against these attacks that seek to divide our country. These divisive ICE raids are not the solution to our broken immigration system.”

“These counterproductive actions not only disrupt the lives of targeted immigrants, they terrorize entire communities, tear families apart, punish hardworking people and force all immigrants—documented or not—to live in constant fear,” said Figueroa. “These harmful immigration policies put a financial burden on taxpayers, make our communities less safe and undermine law enforcement’s relationship with those in the immigrant community. We must bring our immigration system into line with our economic interests and humanitarian values.”

Leaders in sanctuary cities, including New York City Mayor Bill de Blasio, have openly pushed back against President Donald Trump’s deportation efforts. Some leaders of these cities have clashed with state leaders who support Trump. Earlier this year, Florida state lawmakers considered a bill that would have punished local city officials, such as those in Miami, who don’t comply with Trump’s and ICE’s effort to deport undocumented immigrants.

“We call on all sanctuary cities to continue to assist in keeping all families safe,” said Figueroa. “All workers benefit from a functioning immigration system. As a labor union, it’s our duty to fight for commonsense immigration reform to protect all workers, secure our borders and reunite families.”