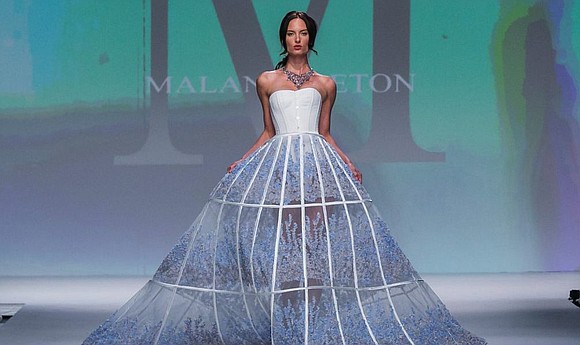 For spring/summer ’18, designer Malan Breton takes his core inspiration from the film, “Yellow Submarine.” Presented on the USS Intrepid aircraft carrier, his collection is a testament to fearlessness and the freedom that comes from the ability to endure what seems to be the impossible, finding strength to open our hearts and minds to only discover our capabilities. This collection celebrates the legacy of Breton as one of New York City’s most celebrated designers of the past decade. The show highlighted a newfound era for the Malan Breton brand.

You remember the animated classic musical fantasy that was inspired by the celebrated Beatles. “Yellow Submarine” was yet another addition to the group’s phenomenon, giving birth to modern animation. The film was released during a tumultuous time in American history, during the height of the Vietnam War.

As usual, Breton’s clothes are dazzling on the New York Fashion Week runway. He continues to advance the refined silken structures of his acclaimed suiting pieces. He is a trend-setting master, and he is often requested to design ensembles for the Red Carpets.

In this show, Breton concentrated on modifications of notable classics. With every piece. Exclusive color palettes were created in hues of gold, white and yellow for women, and blue and white origins were shown for men. Each of these pieces were created with top professional forecasters. Breton required them to play into “yellows” effortlessly. His fabrics were first class. Some looks were spun and draped in uniquely precise layers. He had hand-constructed bodices to use a template of mechanism. The line was structured in deep colors that created a statement. These terrific design techniques also portrayed true masculine styling within the menswear line. His menswear pieces continue to push the envelope, but they remain classic and the core foundation of the

The final message in Breton’s work this season stems from how he intertwined both the men’s and women’s collections in one show. This direction promises to remain at the forefront of Breton’s fashion innovation.