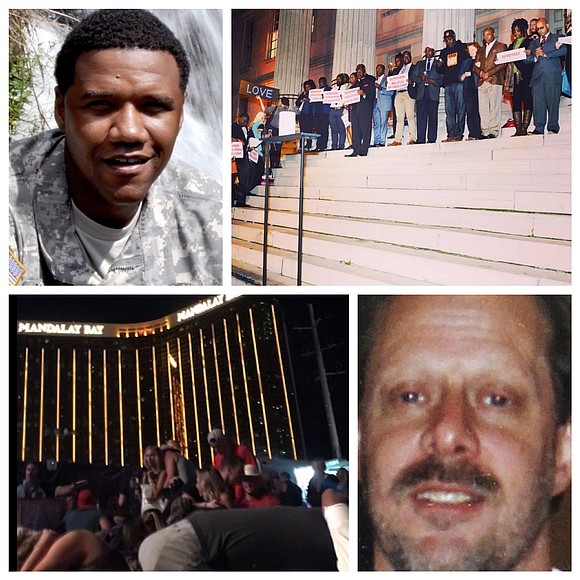 Stephen Craig Paddock was a domestic terrorist whose shooting rampage killed 59 people and injured 530 others during a music festival in Las Vegas Sunday.

Criticism is being voiced about how Paddock is being treated by the media and U.S. government. Being an older white male and not fitting the so-called description of a terrorist, many believe Paddock is getting special treatment.

“There’s a clear difference in the way this kind of incident is treated and the way it would be treated if it were actually associated with Islam or Muslims,” Ibrahim Hooper, representative at the Council on American-Islamic Relations, said in one report. “It would be instantly called an act of domestic or even international terrorism; it wouldn’t be individualized, but collectivized to the entire Muslim community or faith of Islam.”

Reports indicate that Paddock, 64, opened fire from his room on the 32nd floor of the Mandalay Bay hotel just after 10 p.m. He fired hundreds of rifle rounds, raining bullets on the 22,000 concertgoers at the Route 91 Music Festival where country singer Jason Aldean was performing.

Paddock was found dead by police in his hotel room. He apparently shot himself when police arrived. Law enforcement reports that they found 23 firearms in the hotel room and the windows were knocked out with hammers. No motive has been determined.

Among the victims is 34-year-old Black Las Vegas police officer Charleston Hartfield who was also a sergeant in the Nevada Army National Guard and a youth football coach. He was off-duty attending the concert at the time of the shooting.

Locally, on Tuesday night, Brooklyn Borough President Eric Adams led a vigil for the victims of the Las Vegas shooting. The gathering was aimed to bring attention to the ongoing issues of gun violence and attended by Public Advocate Letitia James.

Since the shooting, gun control has also been a topic of discussion. Several local politicians have spoken out about the need for better gun laws in the nation. “We must call this heinous act for what it is, an act of domestic terrorism that has taken the lives of our fellow sisters and brothers,” said Assemblymember Michael Blake. “Let us provide the support to deal with the trauma that this pain will bring onto our people and continue to support organizations in our communities seeking to address and reduce gun violence, even when the cameras are gone. It is not the time to claim rights to bear arms.”

NAACP Interim President and CEO Derrick Johnson said that thoughts and prayers for the victims should be turned into action.

“We continue to call for practical gun-control, and urge members and supporters to reach out to their elected officials,” said. “We must emerge from our grief not as weakened or numb, but as survivors who rallied to make our communities safe from guns and those who wish to cause us harm.”

In the aftermath of the shooting President Donald Trump has yet to refer to Paddock and his act as domestic terror.

“In times such as these, I know we are searching for some kind of meaning in the chaos, some kind of light in the darkness,” Trump said. “The answers do not come easy. But we can take solace knowing that even the darkest space can be brightened by a single light and even the most terrible despair can be illuminated by a single ray of hope.”

Misinformation about ISIS claiming to be responsible for the attack was on the headlines for several news outlets. Those claims have been disputed by the FBI.

Media outlets also continue to mislabel the Las Vegas massacre as the deadliest mass shooting in U.S. history. However, many are criticizing the label because it disregards the mass lynchings, killings and even bombings of Black Americans over the past several decades.

Historians are most notably recalling the Tulsa Race Massacre of 1921 where more than 300 were killed and 800 injured.

“[The] shooting has, on several occasions, been referred to as ‘the worst mass shooting in American history,’ which negates several other incidents in U.S. history, many involving minority victims,” the organizations said. “For example, more than 100 Black people were killed in the East St. Louis Massacre in 1917. More than 100 Black people were gunned down during a mass shooting in Colfax, La., in 1873. Suggestions for future coverage include avoiding superlatives altogether.”