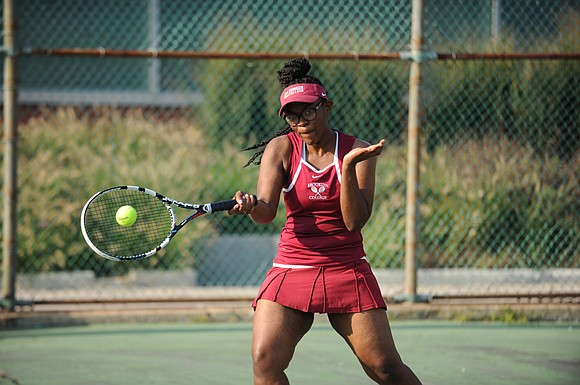 Brooklyn College’s formidable women’s doubles team of Georgeen Belrose and Shannel Johnson refer to themselves as Venus and Serena (after the Williams sisters). Both born in New York and raised in the Caribbean—St. Lucia for Belrose and Jamaica for Johnson—they share an easy camaraderie and a decisive commitment to being stellar student-athletes.

Belrose, a business major, got started in tennis at the tender age of four after watching her brothers play. Johnson, a kinesiology major, started at age 12 when her mother enrolled her in tennis classes because she felt she should take up a sport. “I stuck with it,” said Johnson. “It was a form of stress release and it was fun.”

The competitive aspect of being on the tennis team is exciting. Belrose enjoys going to different schools and taking on the challenge of being their best. Johnson likes being part of a team.

“You have a family outside of your family,” said Johnson. Given the commuter aspect of Brooklyn College, it’s hard to make significant connections. “On a team, we tend to stick together throughout the year.”

Although being a student-athlete can be intense, both agree that it brings a discipline that yields results. Johnson said she’s become a whiz with scheduling. “It does push you to study more and make use of your time,” said Johnson, who plans to attend medical school.

On the court, Johnson said she brings a strong forehand and consistency. Belrose said her serve and her forehand are pretty strong. Just like the Williams sisters, who they identify with and admire, they work well together as a doubles team. At 5-foot-8, Belrose is Venus and the 5-foot-5 Johnson is Serena. “We connect and it works,” said Johnson.

Outside of tennis, Johnson admires track stars Shelly-Ann Fraser Pryce and Usain Bolt, and Belrose is a fan of basketball star Kevin Durant. Johnson is in her third year at Brooklyn College. She is part of the Search for Education, Elevation and Knowledge, which is designed to advance equality in higher education. Also a junior, this semester is Belrose’s first semester at Brooklyn College. She previously attended college in St. Lucia. Being on the tennis team has given her a sense of belonging.