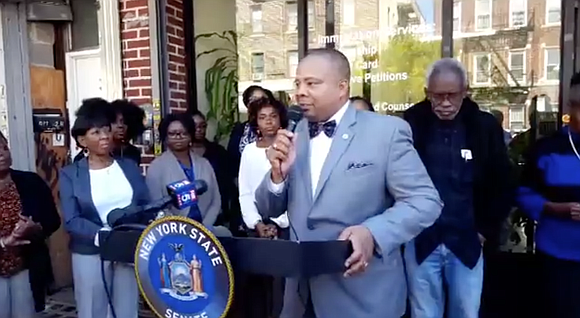 “Maria has finally left us, Lee is still around, but not posing a threat. Nothing else on the horizon, just a tropical wave a long way away and another one just rolled off Africa. No indication that they will develop into anything yet. So a little peace and quiet. Time to focus on recovery,” Caribbean Hurricane Network quoted on their site http://stormcarib.com last week. “Many islands in the Caribbean are hard hit, let us not forget that! Dominica, St. Croix, Puerto Rico, Barbuda, St. Maarten/St. Martin, Anguilla, St. Barts, Tortola, Virgin Gorda, St. John, St. Thomas, Vieques, Culebra…The high season tourist season is a bust for these islands, which means a loss of their main source of income…Recovery won’t be easy, but we have to try our best.”

Meanwhile, as the mainstream media all but ignores many of the islands devastated by hurricanes Irma and Maria, Black folks in the tristate area and beyond concentrate on a variety of grassroots relief efforts.

Brooklyn-based attorney Brian Figeroux said that as lots of everyday people roll up their sleeves to join efforts to assist people in the Caribbean diaspora, communities should monitor the official responses too.

“Puerto Rico and other Caribbean countries were devastated by recent hurricanes which totally or partially destroyed homes, economies, but more importantly the hope for many people battling poverty. Who will be the heroes? Aid from the United States, France, England, the Dutch, all former colonists or the United Nations?” asked Figeroux.

Hamilton stated, “In the aftermath of Hurricane Irma and Maria destroying parts of the Caribbean this month, many islands in the region were left with historic destruction, power outages and damage. What we have in the Virgin Islands and Dominica is a humanitarian crisis. Our thoughts are with the families, first responders and volunteers who are working to save those in immediate need and those who have had their lives forever changed by this storm.”

Omyma David, former Acting Consul General of Antigua & Barbuda in New York and Caribbean Diaspora Disaster Coalition member, said, “The Caribbean diaspora witnessed the chilling devastation wreaked by the recent hurricanes Irma and Maria on our beloved islands. Many of us immediately sprung into organizing relief efforts. Caribbean Day of Giving Saturday, Oct. 7, from 8 a.m. to 6 p.m., provides an excellent opportunity to promote some of the efforts of the Caribbean diaspora across the United States, Canada and United Kingdom in helping to provide relief and aid to our brothers and sisters in the Caribbean.”

This all-day resource raising event will take the form of a radio-thon, featuring music, notable interviews and updates while appealing for community support. Appeals will be made for individuals to give on various giving platforms including direct call, text and online. Those seeking to donate goods will be able to do so at designated drop-off points.

With regards to Saturday’s radio-thon, David assured that more than 30 radio stations across the U.S., Canada and the United Kingdom will participate in Caribbean Day of Giving.

David explained, “Heads of state/leaders in the affected islands have been invited to use this opportunity to share the extent of the devastation, provide updates on the relief efforts and plans for rebuilding. Notable local personalities will also appear to encourage the community and friends of the Caribbean to give to this effort.”

He concluded, “As the former Deputy and Acting Consul General of Antigua and Barbuda, I believe that Caribbean Day of Giving is a wonderful initiative to help mobilize the Caribbean diaspora to support the relief efforts of reputable organizations that will greatly benefit all affected Caribbean islands. As a member of the organizing committee I have observed that there’s tremendous goodwill and interest in this event which further demonstrates the shared commitment of the Caribbean diaspora to always play a role in the development of the Caribbean region.”

Tourism is such a big component of working life on many Caribbean islands. Recovery for that purpose therefore takes on a huge significance. The Caribbean Tourism Organization and the Caribbean Hotel and Tourism Association continue to receive and present updates from member countries and hotels regarding the recovery and rebuilding efforts following the impact of the hurricanes in the northern Caribbean and Leeward Islands.

They continue to announce flights and hotels that are up-and-running and available to try to bring a degree of recovery and normalcy to the Caribbean islands because tourism is a major part of their economy. There will be many demolitions, and immediate rebuilding is part of the aftermath and the new future as recovery is the main focus.

Seaborne Airlines has announced the resumption of service between Anguilla and San Juan. Meanwhile, CTO and CHTA say that the ferry company L’Express Des Iles has resumed service between Dominica and St. Lucia, and that “fax and telephone landline services are back up in the northern town of Portsmouth, and that the main Princess Margaret Hospital continues to function, along with most of the major type 3 health care centers on island. However, it says only some of the wards are currently functional and occupied, water and electricity have been partially restored and only emergency/life-saving surgical procedures are being performed.”

In Cuba, Minister of Tourism Manuel Marrero Cruz is quoted by the official Granma newspaper as saying Cuba will be ready for the high tourist season without a trace of Hurricane Irma. He said power, water and communications were restored in 100 percent of the country’s tourist resorts. Of the 52 hotels in the country’s main tourist destination of Varadero, all except five are open, and the minister said, “By Oct. 30, there will not be a trace of the hurricane in Varadero.”

The British Virgin Islands Tourist Board is in full effect, too.

“Through the BVI Ports Authority, we are on a fast track toward the restoration of Tortola Pier Park’s cruise and shopping facility with a targeted date of reopening at least 50 percent of retail and food and beverage stores by Nov. 1,” Mark Vanterpool, the minister of Communications and Works, said.

President Donald Trump’s short and controversial visit Tuesday notwithstanding, CTO and CHTA said, “The Puerto Rico Tourism Company said it continues to work with state and federal government agencies and is collaborating with industry partners to assess the impact of Hurricane Maria.

The resumption of normal flight operations at Luis Muñoz Marín International Airport is being delayed for safety reasons due to radar functionality limitations impacting the number of arrivals and departures. The airport is operational again but on a limited schedule. There are approximately 12 commercial flights scheduled daily. International flights have not yet been authorized. Airport authorities are working closely with the Federal Aviation Administration to resolve this situation while ensuring safe operations.”