The NYC Basketball Hall of Fame inducts the class of 2017 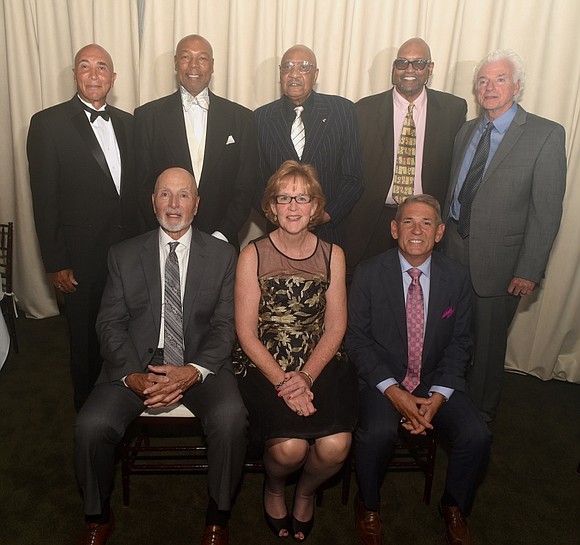 The evening was hosted by longtime radio personality Bill Daughtry and headlined by Lamar Odom, a native of South Jamaica Queens who established himself as a prodigy at Christ the King Regional High School before becoming a two-time NBA champion with the Los Angeles Lakers.

The other inductees were Boys High and Harlem Globetrotters legend Jackie Jackson; Bob Williams, co-founder of the NYC Hall of Fame; Kevin Stacom, who won an NBA championship with the Boston Celtics in 1976; Ron Behagen, a first-round draft pick of the NBA’s Kansas City Omaha Kings in 1973; Steve Lappas, who served as the men’s head coach at Manhattan College, Villanova and the University of Massachusetts; Anne Gregory O’Connell, who scored 2,548 career points and grabbed 1,999 career rebounds playing for Fordham University from 1976 to 1980; and Larry Lembo, who ended his career at Manhattan College in 1965 as the school’s all-time leading scorer (1,443) and later became a highly regarded collegiate official.

“To think about all of the great players from New York City who are in this hall of fame, to now be a part of this group is truly amazing,” said Behagen, a graduate of Dewitt Clinton High School in the Bronx.

“I played basketball for the pure love of the game and never thought I’d be taking a place among so many greats,” said O’Connell, who was a scholastic standout at Monsignor Scanlan High School in the Bronx before setting several records at Fordham.

“This is an honor I will truly cherish,” she added as she will now forever stand alongside members of the New York City Basketball Hall of Fame’s inaugural 1990 class, which includes Kareem Abdul-Jabbar and Red Auerbach.