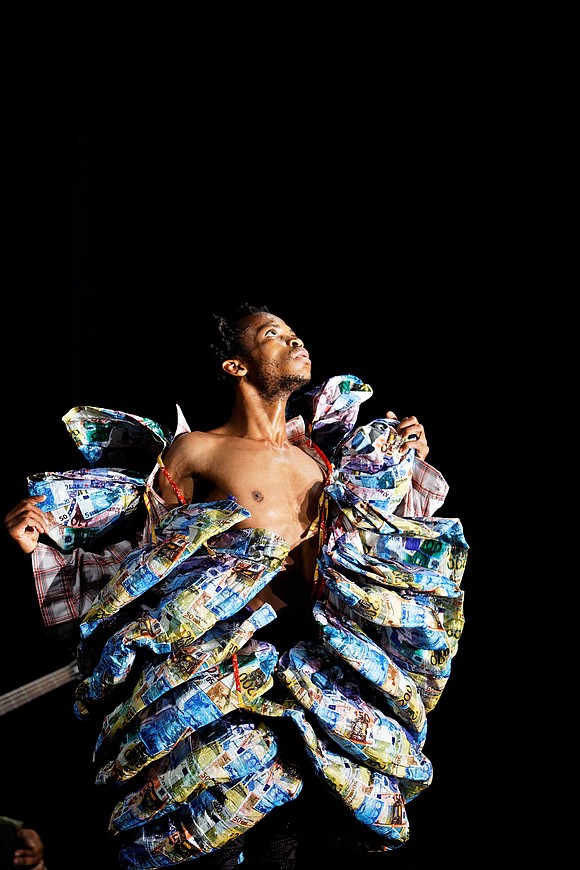 In Faustin Linyekula’s “In Search of Dinozord” (“Sur les traces de Dinozord”), he mixes the tumultuous history of his homeland and the beauty of storytelling through dance in one place, and we watch, listen and learn. The layers are many. From the start, audiences are invited to go on a deeply personal voyage and experience each event along the way. Linyekula pauses, for example, to give background detail of what we saw, what we will see or what led him to where the work is now.

“Once upon a time…” is how this story begins. “In Search of Dinozord,” we learn, is an adaptation of a 2006 work that paid homage to his friend, the Congolese actor, writer, stage director and political prisoner Antoine Vumilia Muhindo. Then, Muhindo’s words were delivered via cassette recording, but for this iteration, Muhindo, now a refugee in Sweden, came through live via Skype. Together, Jeannot Kumbonyeki, Papy Ebotani, Yves Mwamba with Linyekula (dancer), Papy Maurice Mbwiti (actor), Serge Kakudji (singer) and Muhindo (via Skype) recount stories from their childhood and mourn loss as they try to seize deferred dreams. One morning, Linyekula learned from a radio broadcast that there was no more Zaire. Instead, his homeland is now called the Democratic Republic of Congo. This loss and others prompted his search for Dinozord, “…the last of [his] tribe; the last secret, his dream, his love,” he said. Because he lives and works closely with his people in Kisangani, his search is more profound.

Linyekula, the choreographer and director, with the cast of seven in collared long-sleeve shirts, pants and later in white face, tote a red trunk filled with pieces of paper— his friend Kabako’s dreams— across the stage. The countertenor Kakudji singing Mozart’s “Requiem,” the intermittent clicking of a typewriter, Mbwiti narrating in French with English subtitles and disturbing photos from Muhindo’s time in prison combine to frame Linyekula’s movement language.

A quick-paced solo, mixing classical European and traditional African forms, happens upstage away from the audience, while simultaneously, a shape-shifting duet carefully guided by touch and embrace ensues downstage. Both repeat throughout. At one time, all of them drop into their hips and begin a long chorus of hip circles (possibly the Congolese makolongulu or the Caribbean whine). Among Kabako’s dreams that spill from the trunk and blanket the floor, Linyekula finally dances, alone, slowly in gliding circles around the mess of papers. When done, he and the others return Kabako’s writings to the trunk, and then ready themselves to begin again, or continue their storytelling. “I’m trying to make sense of this mess” onstage and at home, Linyekula shares with the audience. Remembering conversations with the Kisangani people about dreams during the making of “In Search of Dinozord,” he said, “My dream was to take my friend Vumi [Muhindo] home… Ultimately it’s about me and the people I care about.”

Later, all the parts come together in a swell when, in an oversize hoodie, Kumbonyeki waxes off B-boy six step, some popping and locking, and at the top of his voice, Kakudji sings Mozart’s “Requiem,” matching Jimi Hendrix’s blues-heavy cry about picking up the pieces in “Voodoo Chile.” If there will be more, given the ever-changing cycle of Linyekula’s home and his want to tell stories through his art, we should ready ourselves for his return.

The U.S. premiere of “In Search of Dinozord” (“Sur les traces de Dinozord”) was presented at Skirball Center for the Performing Arts at New York University (Sept. 22-23) as part of BRIDGING: An International Dialogue on Diversity and Inclusion in the Arts, and in association with the French Institute Alliance Française’s annual Crossing the Line Festival.