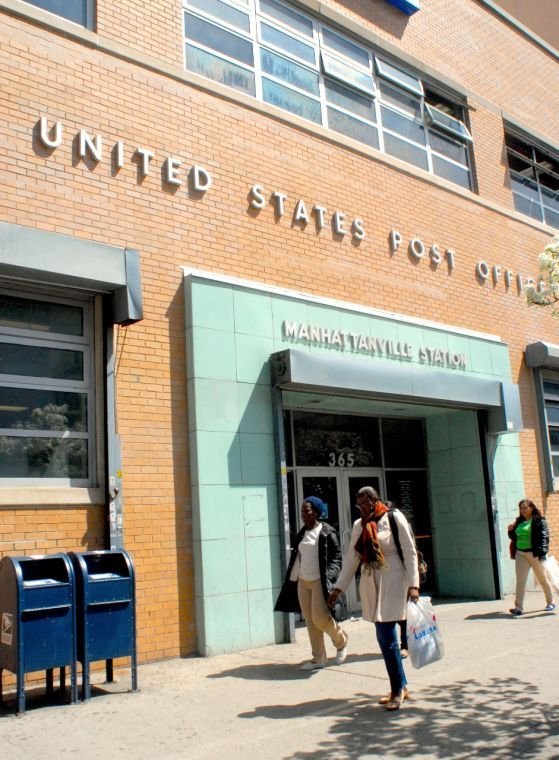 No elimination of Saturday mail ... for now

They tried and failed in Chelsea, but the United States Postal Service wants to sell off a post office building in Harlem and residents aren’t happy.

As the sale of the College Station Post Office on West 140th Street isn’t final, USPS Realty Asset Manager Gregory Lackey can’t say who he sold it to and how much they paid for it. If residents and the New York Metro Area Postal Union have their way, we’ll never know the name because the sale won’t go through.

“They tried to do the same thing at Old Chelsea and the community fought it,” said New York Metro Area Postal Union representative Chuck Zlatkin. “The Postal Service then tried to sell the air rights above the post office and keep the post office.” In this case, the post office is looking to relocate to a new leased facility on the landmarked Striver’s Row on 138th Street. Residents at a community hearing at the Touro College of Osteopathic Medicine in Central Harlem last night voiced opposition to the relocation, stating that Striver’s Row lacks the proper parking to accommodate a post office.

Zlatkin said that Lackey and company have tried to sell off the West 140th Street property for the past decade.

“It seems that since 2009, the post office has been wanting to sell that building and it’s a historic site,” Zlatkin explained. “The post office was built in 1937 and served the central Harlem community. In 2014, the Postal Service had public meetings to explain why they wanted to sell the building and there was a lot of negative reaction in the community. It got pretty quiet after that.”

He continued, “Then, a few months ago, all of a sudden, they got active again.”

When the AmNews contacted Lackey about the building potentially being sold, he said, “The building is being sold because it is about 80 percent vacant since delivery moved to Lincolnton Station. When a building becomes mostly vacant, USPS sells the building (or terminates the lease) and relocates to a right-sized, downsized new location, which is what USPS is trying to do with College Station.”

The statement concluded, “There have been letters to public officials, two recent public meetings, and the public comment period has been extended to at least Nov. 10.”

Zlatkin related that vacancy is high in the building because the USPS cut service there to only two booths whereas there are five available at the College Station location.

On Aug. 29, Lackey sent a letter to Manhattan Borough President Gale Brewer’s office announcing the relocation site for the post office and saying that the 30-day comment period for the public began with the issuance of letter. He cc’d Community Board 10 in the letter but didn’t notify any other public officials. Zlatkin said that according to U.S. code, if you had a prior meeting and you didn’t mention the relocation site at that meeting, you’re required to have another meeting with public officials and interested parties and notify the public at least 15 days before. The 30-day comment period begins the day of that meeting. Lackey initially tried to pass off the 2014 public meeting as the meeting about College Station, even though he didn’t announce a site relocation then, Zlatkin explained.

Zlatkin said he has reached out to U.S. Congressman Adriano Espaillat and requested an investigation by the USPS Office of Inspector General into the details of the sell.

“There should be a moratorium on the sell and relocation until the investigation is complete,” stated Zlatkin.