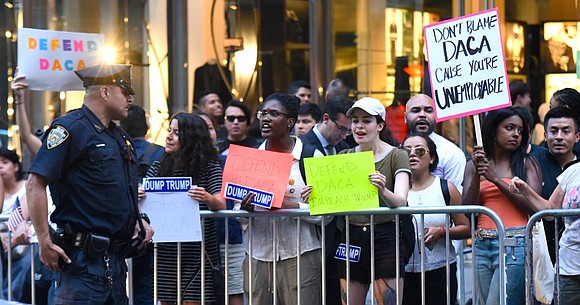 On Oct. 5, the Deferred Action for Childhood Arrivals program reached its deadline for any recipients to renew their permits in hopes of continuing to pursue their dreams. Three days later the Trump administration released an aggressive list of demands that could jeopardize the future for many of those Dreamers.

The Obama-era DACA program, which extended protection from deportation for hundreds of thousands of young people, many of whom were brought to the U.S. illegally as children, and allowed them to work and go to school legally, has been under attack by Trump for several months. He has firmly stated that he would end the program but gave Congress six months to come up with a replacement.

Now the Trump administration is requesting lawmakers prioritize stricter border security and immigration enforcement measures as part of the deal, knowing that such policies have been deemed automatic deal-breakers for Democrats.

Trump’s list of demands included a complete overhaul of the green card system, which will continue to displace immigrant families and children, an increase in border security, crackdowns on unaccompanied minors entering the country and funding for his southern border wall.

Sunday night Democrats blasted the Trump administration for their immigration principles that would completely derail any progressive movements for DACA and its recipients.

“The administration can’t be serious about compromise or helping the Dreamers if they begin with a list that is anathema to the Dreamers, to the immigrant community and to the vast majority of Americans,” said House Minority Leader Nancy Pelosi and Senate Minority Leader Charles Schumer in a joint statement.

The two had previously met with Trump last month when they discussed a DACA fix to border security that would not include any wall funding.

“We told the president at our meeting that we were open to reasonable border security measures alongside the DREAM Act, but this list goes so far beyond what is reasonable. This proposal fails to represent any attempt at compromise,” they stated.

Along with his list of demands, the White House released a letter by Trump to House and Senate leaders stating that his overall reviews of immigration policies were “to determine what legislative reforms are essential for America’s economic and national security.”

“Without these reforms, illegal immigration and chain migration, which severely and unfairly burden American workers and taxpayers, will continue without end,” Trump added.

With 60 votes needed in order to make it into the hands of Trump, lawmakers continue to scramble to come up with a DACA fix that Democrats and Republicans can both agree on.