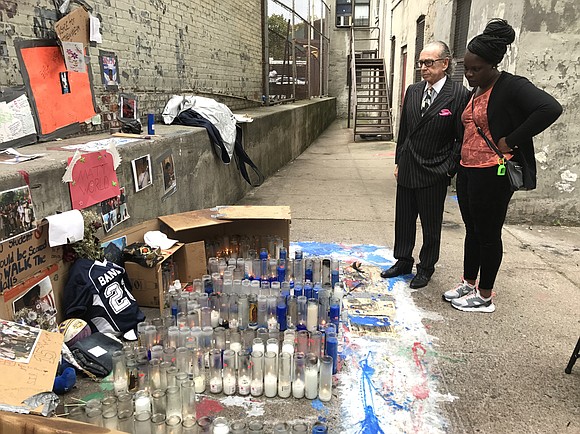 Friends and family attend funeral services for 15-year-old Matthew McCree on Saturday at Castle Hill Funeral Parlor in the Bronx. McCree was stabbed to death during class at his high school by a student who claimed he was being bullied by McCree and another student.

A viewing and religious service took place on Friday night. McCree was buried at the Canarsie Cemetery.

Candles and photos of McCree are still visible in the backyard of his apartment building on Mapes Avenue in the Bronx. Family and friends are mourning the teen who was stabbed to death by a student at his school last month. Louna Dennis, his mother, vows to continues her quest for justice for her slain

Last week a candlelight vigil was held outside of McCree’s apartment building. Dozens of his friends and classmates from the Urban Assembly for Wildlife Conservation reportedly attended the vigil to pay their respects to the young man who had dreams of being a college athlete.

“My son was no bully,” Dennis maintained as media outlets and even advocacy groups continue to put blame on her son who was killed by someone he was allegedly bullying.

The suspect, 18-year-old Abel Cedeno, alleges that McCree and another student, 16-year-old Ariane Laboy, were bullying him by throwing pencils and paper at him. Police say Cedeno whipped out a 3-inch switchblade he purchased online and stabbed the teens in their chests. McCree was killed and Laboy was left in critical condition from the hospital on Sunday. Reports indicate Cedeno said he was the victim of years of harassing and bullying because he was bisexual. He said he was the victim of constant teasing because he was “different.” He remains in jail charged with murder, attempted murder, manslaughter, attempted manslaughter, assault and criminal possession of a weapon.

“There’s serious issues involving the Department of Education’s liability in the school,” said Dennis’ lawyer, Sandy Rubenstein. “Eighty percent [of] teachers and 45 percent [of] students didn’t feel safe. There was harassment complaints in this school.”

Rubenstein went on to say that the family will address the specifics of their legal action after McCree’s funeral.

A reported two dozen parents are trying to take their children out of P.S. 67, the building where the stabbing occurred. The building also houses an elementary school and middle school.

“We are reviewing each request and working closely with families,” said DOE spokeswoman Toya Holness in one report.

In regards to bullying, public schools are on the verge of dealing with the resurgence of a familiar danger: victims retaliating against their bullies by deadly means.

Last week, a 13-year-old student was caught with a .22-caliber handgun inside the Bronx Green Middle School. Reports indicate the student brought the weapon to the school, which doesn’t have metal detectors, to protect himself against bullies. The student was arrested.