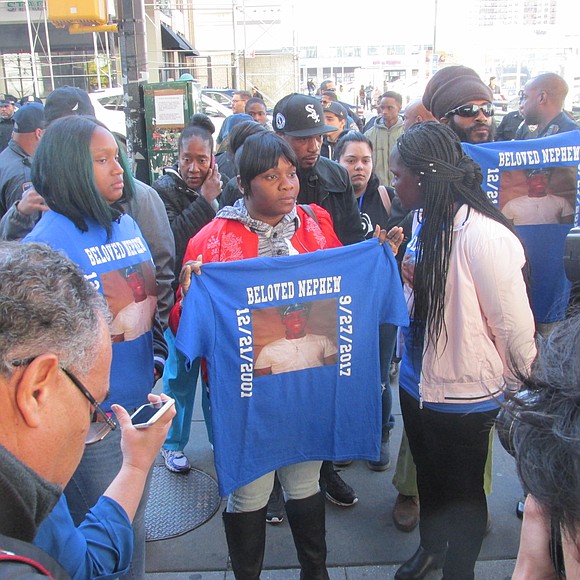 Matthew McCree is dead and Abel Cedeno is alive; however, that didn’t stop a grand jury from downgrading Cedeno’s murder charge to manslaughter. His supporters call the new indictment a “victory.”

Appearing before a grand jury at the Bronx Hall of Justice Tuesday, 18-year-old Cedeno maintained his defense that he was being bullied for his sexuality by 15-year-old Matthew McCree and 16-year-old Arianne Laboy during a history class at Urban Assembly School for Wildlife Conservation last month.

“The grand jury realized that he was under extreme emotional distress as a result of being bullied all these years,” said Cedeno’s defense attorney, Robert Feldman. “This is a huge victory for all gay people and all people who have been bullied.”

The alleged taunting led to Cedeno whipping out a switchblade he bought two weeks prior on Amazon leading to McCree’s death and Laboy being critically injured.

“My son was never a bully,” said McCree’s mother, Louna Dennis, during a news conference Monday as supporters for Cedeno shouted nearby. “My son never had words with the accused killer before he took my son’s life. “

Dennis also questioned why Cedeno, who was 18, was in the same class as her 15-year-old son. She also disputed claims that McCree was “homophobic,” citing that he had gay friends and family members and had no issues with people’s sexuality.

Concerns on both sides are being raised over public school safety. Teachers reportedly did not step in to deescalate the situation, and metal detectors were not in place at the school.

Funeral services were held last Saturday in the Bronx for McCree. Dozens of friends and family attended the emotional service for the young man who had dreams of going to Fordham University to play basketball.

On Friday, a wake was held for McCree that was reportedly attended by hundreds of people and Mayor Bill de Blasio. McCree was buried at Canarsie Cemetery.

“It’s rough, but we’ll get through it. And what can I say, Matthew’s in a better place,” his aunt said at the funeral.

Cedeno previously said that he had not had interaction with McCree and Laboy before stabbing them. Law enforcement said the two were throwing pencils and paper at him. In an interview from jail in one report, Cedeno changed his story, saying that the two were punching him and he stabbed the teens out of self-defense.

Cedeno also said that he believed that McCree was a gang member and was going to harm his family.

Staying true to her word, McCree’s mother was in court Tuesday as she continues to seek justice for her son. Demonstrators who were in support of Cedeno held signs and yelled at her and her family just two days after her son was buried.