Giants rediscover running game in first win of the season 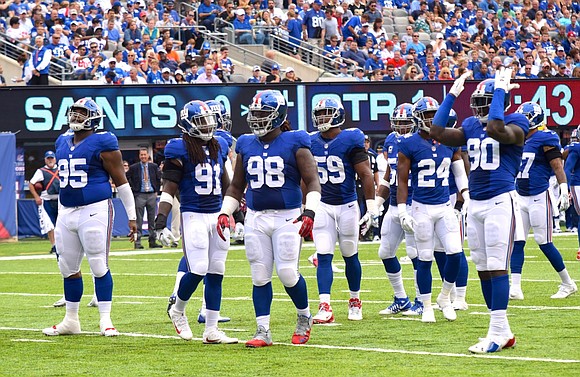 The Giants trotted onto the turf at Sports Authority Field at Mile High in Denver Sunday night to face the Broncos as a team decimated by injuries and embroiled in turmoil.

Wide receivers Odell Beckham Jr., Brandon Marshall, Dwayne Harris and Sterling Shepard were all out with injuries. Beckham and Marshall are done for the season with ankle injuries, and Harris is out for the remainder of the Giants schedule with a broken foot. Shepard, the productive second-year receiver, was sidelined with an ankle injury.

On the defensive side of the ball, starting defensive end Olivier Vernon was inactive because of a problematic ankle and starting outside linebacker Jonathan Casillas didn’t suit up as a result of a neck injury. To make matters worse, a healthy Dominique Rodgers-Cromartie was suspended after leaving the Giants’ facility last week without permission, precipitated by his anger at members of the team’s coaching staff over his role. The financial fallout for the 31-year-old was steep, costing the Tennessee State alumnus a $410,588 paycheck. The defensive back is in the fourth year of a five-year, $35 million deal.

So conventional wisdom led most followers of the NFL to conclude it wasn’t a matter of if the then 0-5 Giants would lose to the Broncos, who entered the match up 3-1, but by how much. Yet, as implausible as it seemed, the Giants went out and controlled both lines of scrimmage, rediscovering an effective running game and putting consistent pressure on Broncos quarterback Trevor Siemian.

Behind a reshuffled and significantly improved offensive line, Giants running back Orleans Darkwa ran for 117 yards on 21 carries and defensive end Jason Pierre-Paul accounted for three of the defense’s four sacks to lift their team to a 23-10. With the odds rightfully stacked against them, the Giants used their obvious disadvantages as a galvanizing rallying cry.

“We talked about it all week long,” said Giants head coach Ben McAdoo after the victory put the Giants at 1-5 going into this Sunday’s game against the 3-2 Seattle Seahawks (4:25 p.m.) at MetLife Stadium. “Revisited it last night and we talked about—our record wasn’t good. But that doesn’t mean we’re a bad football team. We are a good football team. We just need to find paths to victory. We found one tonight.”

Indeed, the Giants season thus far is dotted with should of, could of and would of. Three of their five losses have been by four points or less, two against the Philadelphia Eagles and Tampa Bay Buccaneers by field goals as time expired to end the game and in overtime, respectively. With a little better execution by the players and in-game coaching decisions, the Giants could be 3-3 or 4-2. Instead, they are what they are.

Nevertheless, an impressive and inspiring win in Denver, at least for one week, brought welcome relief from an otherwise disappointing and dysfunctional season.