The Jets are competing, despite flags on their play 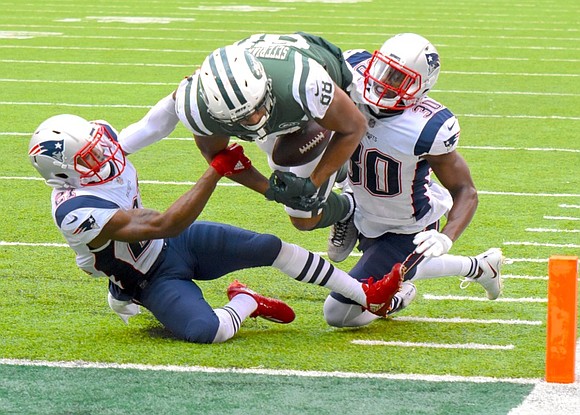 With the Jets ahead 14-0 at the six-minute mark of the second quarter of Sunday’s game, the New York Jets were at the point where most assumed that the defending Super Bowl champions, the New England Patriots, their AFC East division rival, would be ahead, leading in the game.

On a 78-yard drive in the second quarter, Kerley caught a 31-yarder from McCown for the team’s second touchdown of the day. McCown has connected with Kerley each of the 19 times he’s targeted him this season.

“We feel we can beat anybody,” said rookie safety Jamal Adams, the Jets’ 2017 draftee from LSU. But their letup and flags on their play with less than six minutes to go in the second quarter were problematic for the Jets, resulting in the Pats scoring twice, ending the first half 14 all, and then taking the lead in the third quarter. But Adams is correct if they do a better job of capitalizing on opportunities such as when rushing the passer and getting yards on rushing and taking better care of the ball. Not making plays can hurt; so can penalties. And so do questionable calls.

The Jets took a loss from officials on a key play with Sefarian-Jenkins that put them in position to tie. Tearing through defenders into the end zone after catching a pass from McCown in the fourth quarter that would have cut the Patriots’ lead, Sefarian-Jenkins made a touchdown play that was called back and denied after review. Officials ruled that he fumbled the ball before breaking the plane and didn’t regain possession until he was out of bounds. A questionable call. The Jets turn the ball over. A fumble and a touchback.

Also taking the high road, but somewhat denying so, was Sefarian-Jenkins. “It’s a fumble and a touchback,” he said. “That’s what it is. It’s not like I’m taking the high road. I’m just saying what the facts are [regarding the NFL rule for possession of the ball]. I don’t think it does anything for me to come up here and blast the official, or blast the rule. I don’t feel like I fumbled, but it is what it is. I can’t control that. I have a game next week. This game’s over with. They played well. They made two more plays than us to win, and that’s what it is.”

That game next week brings the Jets to Miami to play against the Dolphins, another AFC division rival. The Jets, now 3-3, beat Miami in September 20-6, so Miami (3-2) will be looking to avenge their loss.