Letter to the Editor: Coverage of Las Vegas shooting 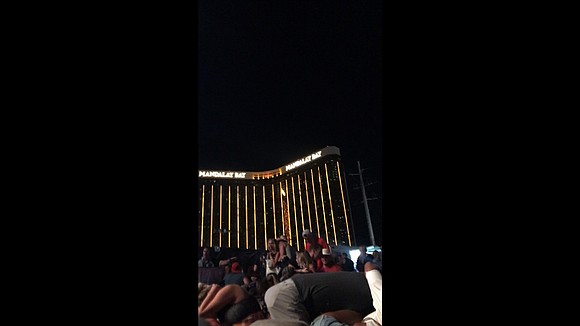 Las Vegas Mass Shooting. People are hunkered down at the Jason Aldean concert as a gunman opens fire on the crowd. Shaun Hoff photo

This letter is in response to the articles covering the recent shooting in Las Vegas.

Bertrand Russell said, “Do not fear to be eccentric in opinion, for every opinion now accepted was once eccentric.”

The Second Amendment of the United States Constitution states, “A well-regulated militia, being necessary to the security of a free State, the right of the people to keep and bear Arms, shall not be infringed.” Obviously the need for a state militia has been replaced by the National Guard and Coast Guard whereby trained military personnel are entrusted with the defense of this country against domestic enemies. Their weapons are tightly controlled and safeguarded.

The only two reasons for a citizen to own a firearm are for hunting or defense of the household from intruders. In either case, ownership of a handgun, shotgun or rifle is more than adequate to satisfy these purposes. There is absolutely no need for any U.S. civilian to own any weapon more powerful or sophisticated than these weapons.

Accordingly, all handguns, shotguns and rifles must be licensed and registered to the degree necessary to match weapon to owner at the click of a computer key. Furthermore, we must guarantee that the mentally ill do not gain access to them under any circumstances. Finally, if we had prohibited the purchase of more sophisticated weapons, many innocent victims would not have died or been harmed at shopping malls, college campuses, congressional meetings, churches and now concerts. We as a country must deal with this issue immediately lest our society fall back to the days in the Old West when everyone wore a holster.