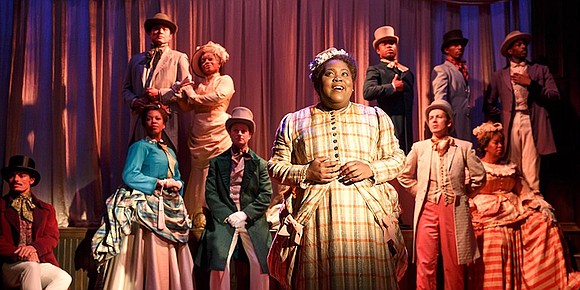 The word is out for the nominees of the 45th annual Vivian Robinson AUDELCO Awards, which recognize excellence in Black theater. The awards will take place Monday, Nov. 20, at Symphony Space, 2537 Broadway at 95th Street, from 7:30 p.m. to 10 p.m. Come out and be prepared to enjoy New York’s biggest Black theater family yearly event! There are 20 categories under which productions are judged, and this year 47 shows have made the list.

Nominated in the solo performance category is Anna Deavere Smith for “Notes From The Field,” Timothy Simonson for “Adam,” Ingrid Griffith for “Demerera Gold,” Malik Work for “Verses at Work,” and Sarah Jones for “Sell/Buy/Date.”

In addition to the nominees, this year’s AUDELCO Awards have the theme “Making History—Black Joy,” and AUDELCO will be honoring the cast of “Jitney,” which played on Broadway recently, along with the show’s director Ruben Santiago-Hudson with a “Making History Award.” In bringing “Jitney” to Broadway, Santiago-Hudson made history because he succeeded in getting the last of August Wilson’s 10-play series to Broadway. This year’s AUDELCO Awards will have as honorary co-chairs Sheryl Lee Ralph, who recently starred in “Wicked” on Broadway, and Chuck Cooper, currently starring in “Prince of Broadway.” Honorary co-hosts will be Broadway actress Brenda Braxton and George Faison, Tony Award-winning choreographer and founder of the Firehouse Theatre. Special Pioneer Awards will go to Thelma Pollard and Ishmeal Reed. Outstanding Achievement Awards will go to playwrights Dominique Morriseau and Lynn Nottage. Special Achievement Awards will be presented to Dale Ricardo Shields and A. Curtis Farrow. Board of Director Awards will be presented to Camille Billops, James Hatch and John D. Smith. The Rising Star Award will go to Jordan Tyson, who starred in “Sweetee.” The Obediah Dance Company will perform at the 45th anniversary.