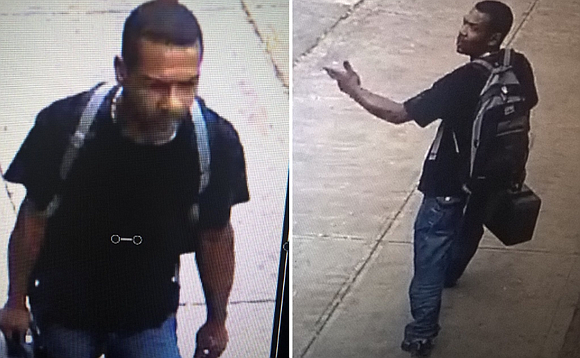 Police have released images of one of the men suspected of the home invasion in Brooklyn last week that left an elderly man dead.

The suspect is seen on surveillance footage leaving the scene carrying a lock box, similar to one stolen from the Decatur Avenue apartment of Waldiman Thompson, officials said. The suspect is wanted for questioning in the death of 91-year-old Thompson at his home Oct. 11.

Authorities said two men entered the ground-floor apartment that Wednesday afternoon around 3:30 p.m., where they tied up Thompson and his 100-year-old wife, Ethlin, and ransacked the home.

Ethlin Thompson managed to free herself and call for help after the robbers made off with their goods. However, her husband of 30 years suffered a heart attack and was pronounced dead later that afternoon at Interfaith Medical Center, officials said.

The NYPD is offering a $10,000 reward for information leading to the arrest and conviction of anyone involved in the robbery.

The Bed-Stuy community continued to mourn the loss of Thompson at a vigil Sunday night as they searched for answers as to why anyone would want to harm a caring elderly couple.

Micheal Tucker of Lay the Guns Down Foundation and Pastor Sharmaine Byrd of Greater Mt. Carmel Cathedral and Worship Center were organizers of the vigil that brought out many community organizations, advocates, residents and even the Brooklyn district attorney.

“This was very important because we wanted to send a strong message to the community and people in general that elder abuse or any kind of crimes committed against senior citizens will not be tolerated,” said Tucker.

“I feel that we’re making progress, the police department is doing a fantastic job in keeping the community updated,” said Tucker. “There are a lot of people upset, but we want the community to let the police do their job.”

Tucker hopes that if anyone knows the individual in the recently released images—whether he’s a perpetrator or not—to talk to him about turning himself in “so they can start the healing of this evil situation.”