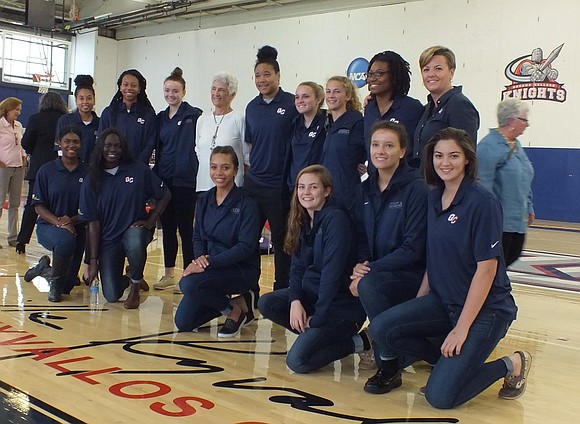 Last Saturday, Queens College officially named its basketball court inside Fitzgerald Gymnasium for Lucille Kyvallos, who coached the Knights from 1968 to 1981. A member of the New York City Basketball Hall of Fame, she compiled a record of 239-77 during her coaching tenure at Queens. Among her players were Olympian Gail Marquis and former WNBA president Donna Orender.

Now in her seventh season as the head coach at Queens, Elizabeth Naumovski has embraced the program’s history, which included the first women’s college basketball game played at Madison Square Garden, a 1975 matchup against Immaculata. Naumovski has brought that history to her players.

“To hear firsthand from alumnae meant a lot to the players and to me,” said Naumovski. “Our alumnae genuinely still care about the program and how we are doing today.”

Naumovski called Saturday’s events a full circle moment. When she became the coach at Queens, the team was far from its glory days. Kyvallos’ legacy fueled her desire to return the Knights to prominence, which has happened in recent years. As the Knights progressed, she encouraged her players to interact with Kyvallos and former players.

“Everybody who comes here needs to know about the program’s history, what those players accomplished and hopefully aspire to accomplish the same things,” Naumovski said. “It’s nice to see going into my seventh season that vision has somewhat come to fruition.”

Senior guard Merrick Rowland, whose older sisters MacKenzie and Madison helped bring Queens back to national prominence, will take on a leadership role this year. In the offseason, she worked on her defensive skills and being a vocal leader.

“I feel I keep everyone on track,” said Rowland, who said she has become more organized during her years at Queens. “In practice, keeping the energy up. Also, off the court, making sure everyone is on top of their schoolwork.”

Rowland appreciated seeing Kyvallos become the first woman to have a basketball court named in her honor in New York City and appreciated how many former players were there to celebrate the day. “After all the history that has gone on here, it’s an honor to be on the team. I want to keep the tradition going and keep improving the program,” she said.

The Knights open play Nov. 11. The first home game on the newly named court is Nov. 18.