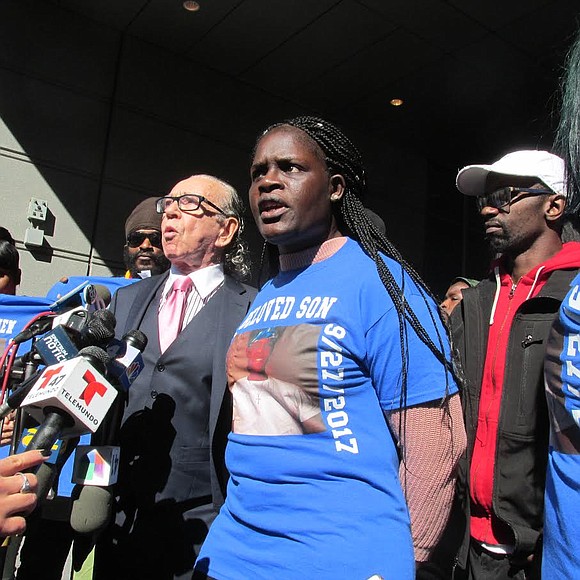 The mother of the teen stabbed to death last month at a Bronx high school announced her plans to sue the NYC Department of Education and the NYPD for $25 million.

In the wrongful death lawsuit, the mother of the late Matthew McCree, Louna Dennis, said that her son’s death could have been prevented.

McCree, 15, was killed in September during class at Urban Assembly School for Wildlife Conservation by 18-year-old Abel Cedeno who claimed McCree and another student, 16-year-old Ariane Laboy, were bullying him. Whipping out a switchblade he bought online two weeks prior, Cedeno stabbed both boys, killing McCree and injuring Laboy.

Cedeno was indicted last week on manslaughter charges and is currently on Rikers Island. He is due back in court in November. Claiming to be bisexual, Cedeno said he’d been bullied for years and initially claimed that Laboy and McCree didn’t bully him until the day of the attack. However, he changed his story and said he feared the two were gang affiliated and they began punching him during class.

Police dispute the claim, saying that the teens were throwing paper and pencils at Cedeno before the stabbing.

“My main concern is getting justice for both boys,” Dennis said during a news conference this week. Dennis’ legal team says that metal detectors were not installed at the school and that an overwhelming number of teachers and students didn’t feel safe. They also cite the school’s failure to follow the Dignity for All Students Act, which requires protocol when dealing with school bullying.

Questions about classroom safety have also come into the spotlight. Dennis continues to question why her 15-year-old son was in that same class as Cedeno, who is 18. There were also two teachers in the classroom when the attack took place.

“There was a recipe for disaster at the Urban Assembly School for Wildlife Conservation,” said Dennis’ attorney Sandy Rubenstein.