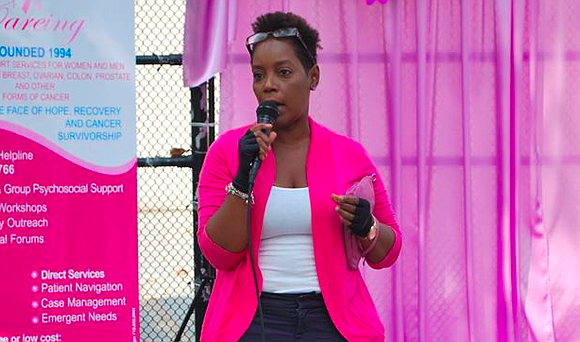 Breast cancer survivor Allison Alexis will tell one and all that this ravaging disease is one of the most common diseases that affects women nationally. Approximately one in eight women is diagnosed with breast cancer. An unfortunately large number of those women were unaware they had the disease until it was too late. Studies show women who are diagnosed early are more likely to successfully fight the disease than those who are unaware of it until later. Physicians strongly encourage women to have monthly check-ups and to self-examine.

Unfortunately for Alexis, she was the one in eight who was diagnosed with breast cancer. On March 14, 2011, she was told she had the disease, but she said, “Through the support of my loved ones and my faith in God, I knew I could overcome it.”

A little over a month later, Alexis had a lumpectomy—a surgical procedure to remove abnormal tissue from the breast. It is recommended that women have at least two weeks to recover from the surgery, but financial pressures forced Alexis to go back to work a week later.

Chemotherapy eventually followed and so did radiation treatment. “In total, I had four sessions of chemotherapy and they were three weeks apart,” she told the AmNews. “It was a horrific experience and the pain was unbearable. But I kept saying to myself ‘be strong and it’ll be over soon.’ After chemo, I had about 33 sessions of radiation treatment. The procedures made me physically and mentally vulnerable. It was hard but thanks to the members of the SHAREing & CAREing organization, they helped me stay vigorous.”

A year later, Alexis was cancer-free, and she is now a community-based breast cancer awareness advocate. “In September, I coordinated the fourth annual Cancer Walk in Richmond Hill, Queens,” she said. “More than 60 people came to the event. I am thankful for those who came out to the event and supported the walk. The purpose of the walk is to bring awareness of breast cancer in our communities. People may not realize it, but having a support system from friends and family plays a significant role when you are seeking treatment. There were times when I didn’t have the support that I needed and I do not wish anyone to go through what I did. I want to lend out a hand to those who are fellow survivors who are going through the process.”

The walk was held at the Phil “Scooter” Rizzuto Park. The funds raised from the Queens Cancer Walk were donated to the SHAREing and CAREing organization. Alexis also honored fellow breast cancers survivors and researchers. Amsterdam News editor, founder of the Square Circles and breast cancer survivor Nayaba Arinde was also awarded through the event.

This Saturday, Oct. 28, Alexis will be hosting the Veterans Appreciation Luncheon at the TrendZ Lounge, 8906 Ditmas Ave. in Brooklyn. “I believe it is important to host events like the veterans appreciation because it shows that we are acknowledging their efforts on making our communities a better place,” said Alexis. “Just seeing the appreciation the veterans have when we have programs like the luncheon can be very awarding.” Alexis is inviting the general public and all service members to the event.