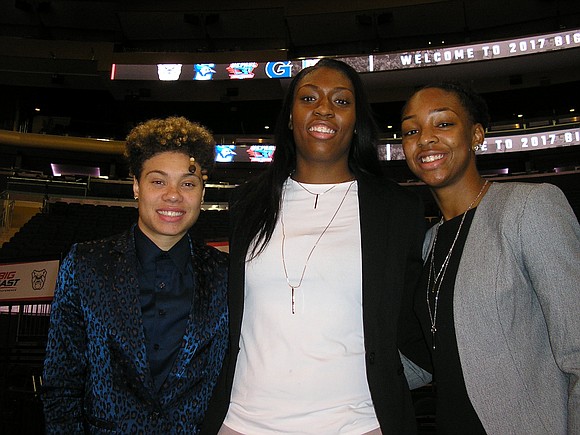 Georgetown University, alma mater of the New York Liberty’s Sugar Rodgers, has a new head coach this season. James Howard is excited to see what his student-athletes bring to the court and in the classroom. “We have some veterans returning,” he said. “We’ve got some outstanding student-athletes that are working hard.” There are a couple of underclassmen sitting out this season, but they will help build the program going forward.

Marquette junior forward Erika Davenport said she and her teammates are looking forward to building on their success and improving on their weaknesses. “It’s big for us to keep working and keep pushing forward and not dwell on the past—think about the future,” said Davenport.

Davenport and junior guards Allazia Blockton and Natisha Hiedeman all participated in the Big East’s transition game program, which gave them information about life after college and also identified personal strengths. On the court, they’re ready to compete. “We put in a lot of work all summer. We did a lot of lifting and extra reps,” said Blockton.

DePaul senior guard Amarah Coleman is hopeful the program will make its 16th consecutive appearance in the NCAA Tournament. To get to that point, she’s looking forward to playing with teammates old and new. “For DePaul, we don’t just set one leader,” Coleman said. “Everybody is a leader on this team. Everybody plays a role. Everybody puts their minds together to help build this team and make each other better.”

Creighton senior guard Sydney Lamberty is excited that last season the team earned its first NCAA Tournament berth since 2013. Leading up to the fall, she has worked on her leadership skills—going from leading by example to being more vocal. She’s a little antsy for the season to start.

“I’m really excited to see what this team can bring,” said Lamberty. “We lost some key players from last year. I can’t wait until we get on the court and see how we do against other teams.”