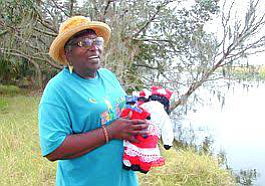 Many years ago, while conducting research on the Gullah-Geechee culture in the small islands off the coast of South Carolina, I had plans to extend this pursuit to Georgia, particularly to Sapelo Island. I got so consumed with the studies on the islands of Wadmalaw and Johns that I never made it to Sapelo. Those memories came flooding back to me the other day when I learned that Cornelia Bailey had died.

If Sapelo, an island off the coast of Georgia, and Belle Marsh, where she was born and raised, can be said to have a supreme griot, one who could render its history and culture with passion and authenticity, it was Bailey.

Born June 12, 1945, Cornelia Walker Bailey was the daughter of Hicks Walker, who worked at the tobacco heir R.J. Reynolds Jr.’s mansion on the island. The house, according to several accounts, was built by Thomas Spalding in the early 1800s, whose enslaved Africans grew cotton, rice and sugar cane.

Among the captives at the Spalding plantation was Bilali Muhammad, a Muslim who Bailey claimed as a distant relative. This piece of her ancestry appears in her memoir “God, Dr. Buzzard, and the Bolito Man: A Saltwater Geechee Talks about Life on Sapelo Island, Georgia” (2001), a book she wrote with Christena Bledsoe. She wrote that as a child she was taught to pray facing east like most Muslims in the community, and the women of Sapelo covered their hair in church.

In her book, Bailey has a number of interesting stories, especially about her mother, Hettie Bryant, who she said believed in spirits. Whenever her eyeglasses were found in a place where she did not leave them, she believed her long-dead uncle was the one who moved them.

“Mama would call on the spirit of Uncle Shed to put her glasses back,” Bailey wrote, “and she’d go and do her work and come back, and those glasses would be on the table right where she left them.”

When discussing her day to day life on Belle Marsh, Bailey noted they cooked on a wood stove, preparing the traditional Gullah cuisine, and that her childhood was both rough and idyllic. Like many of the best storytellers of the island, Bailey was proficient in the language, often explaining the origin of certain words that were derived from African languages and others. “What most people would call an ‘outhouse’…we called a ‘toilet’ because we still used a few words from the French era of Sapelo and that was one of them.”

By the 1970s when I was doing my research in the islands, the isolation that had preserved the African survivals—the basket making from palm fronds, the shellacking of pussy willows and the bundling of hatpins—was threatened by the advancement of the outside world, including the draining of swamps and the development of golf courses.

Sapelo experienced a similar invasion, one that began much earlier. Bailey wrote, “Back in my youth in the 1940s and 1950s, we had five Geechee communities on Sapelo and more than 450 people. Today, we have one community left and fewer than 70 people, and I fear for the survival of my people on this island.”