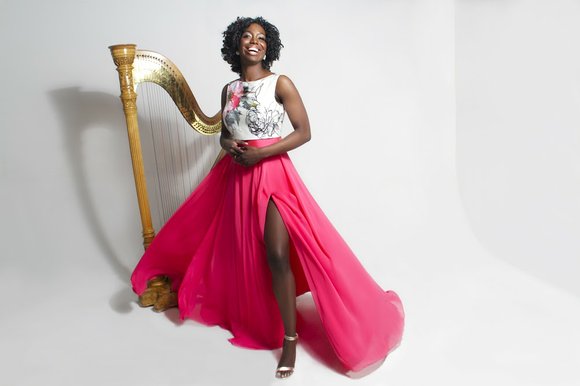 Harpist Brandee Younger has had a connection with the late, great jazz musician Alice Coltrane for some time.

“I’ve always been obsessed with Alice Coltrane,” she said. “My parents gave me the Alice Coltrane ‘Priceless Jazz’ CD when I was in high school, and the first track on the record was ‘Blue Nile.’ When I heard it I said, ‘Oh my God, I want to do this.’ I knew that from day one.”

But it wasn’t until 2007 that Younger got her fateful chance to play Coltrane’s music at her memorial service. “I spent a lot of time in college writing letters to Alice Coltrane. I would handwrite them and edit them, but they were just never good enough to send, but then in 2007, she passed away. But as the way things happen in the universe, Ravi [Coltrane] called me out of the blue to play her memorial at Saint John the Divine Cathedral. It was a musical memorial. That is how we first met. Of course, there were a range of emotions. After not sending those letters, that was my opportunity to actually be able to express my love and appreciation for her music.” Younger and Ravi Coltrane bonded and continued to maintain a friendship after the memorial. They recorded songs dedicated to Alice such as “For Turiya” with Charlie Haden.

There were a host of tribute concerts over the years, but a decade passed before Younger was to play The Ecstatic World of Alice Coltrane Turiyasangitananda tribute concert at the Red Bull Music Academy Festival in NYC earlier this year. Younger again shared the stage with Ravi, Reggie Workman and others. On Oct. 29, Younger will team up with Alice and John Coltrane’s daughter, Michelle Coltrane, in Los Angeles to perform The Ecstatic World of Alice Coltrane Turiyasangitananda tribute concert once again. Younger has been the go-to harpist to uphold the music and legacy of Coltrane’s music. Her talent and commitment to Coltrane’s music is commendable and completely pure.

Younger commented, “I got to work with Pharoah Sanders a couple of times, and when working with my own band, everything sort of became a tribute to Alice. I’ve added more and more of her music into my repertoire.” Younger is following Coltrane’s calling, and over the years she has proven herself to be a dedicated member of Coltrane’s legacy.