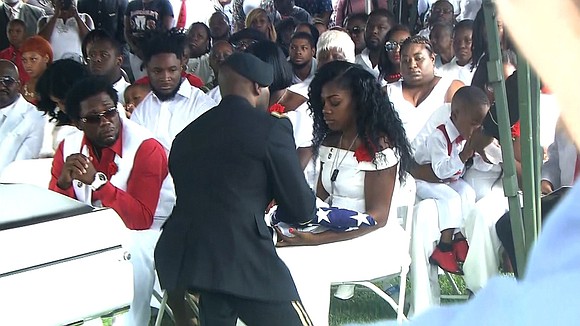 Loved ones said goodbye to Sgt. La David Johnson, who was killed in an ISIS ambush in Niger, in a private funeral in Cooper City. CNN photo

As the pregnant widow of Army Sgt. La David Johnson buries her husband, her tragedy has been the backdrop for a war she didn’t want to be part of.

Myeshia Johnson was somber as she kissed the casket of her late husband during a funeral in Florida last weekend. With her 6-year-old daughter by her side, she held the flag that was draped over Sgt. Johnson’s casket. She is expected to give birth to their next child in January.

Fast forward to Monday, Johnson bravely addressed the controversy that had been surrounding her since President Donald Trump phoned her to give his condolences. While in the vehicle taking her to the airport to see that casket that contained her husband’s body, she heard something that made her already broken heart sink even more.

Reports indicate that Trump said, “He knew what he signed up for, but I guess it still hurts.” He also didn’t know Sgt. Johnson’s name and referred to him as her “guy” rather than her husband. The incident was brought to light by Congresswoman Frederica Wilson, who is a longtime friend of the family. The call was on speaker phone and she it.

“It made me cry ‘cause I was very angry at the tone of his voice and how he said he couldn’t remember my husband’s name,” Johnson said in televised interview. “The only way he remembered my husband's name is because he told me he had my husband’s report in front of him and that’s when he actually said La David.”

Johnson also questioned what happened to her husband during the deadly attack in Niger. Sgt. Johnson was separated from the other soldiers. His body was not recovered until 48 hours after the attack. Johnson has yet to see his remains.

“They told me that he’s in a severe, a severe wrap like I won’t be able to see him,” she said. “I need to see him so I will know that [he] is my husband. I don't know nothing. They won’t show me a finger, a hand. I know my husband’s body from head to toe. And they won’t let me see anything.”

Before the interview, Trump went into Twitter attack mode against Wilson, calling her “wacky” and stating that her claims were fabricated. The blow deepened Monday when Trump tweeted after Johnson’s interview, calling her a liar.

“I had a very respectful conversation with the widow of Sgt. La David Johnson, and spoke his name from beginning, without hesitation,” he said.

Addressing his behavior again Wednesday, Trump said to a field of a reporters that he was sympathetic on the call.

“I was really nice to her,” he said. “I respect her. I respect her family. I certainly respect La David, who I, by the way, called La David right from the beginning. They put a chart in front, La David, it says La David Johnson."

During a White House press briefing last week, Trump chief of staff and Gold Star father, Gen. John Kelly, criticized Wilson for listening to the phone call and speaking out about it. He also referenced a speech she delivered in 2015 where he alleged she bragged about securing funding for an FBI field office. Video of the speech later discredited him.

“It stuns me that a member of Congress would have listened in on that conversation,” he said. “Absolutely stuns me. And I thought at least that was sacred.”

In response, Wilson maintained what she heard on the call amid attacks from both Trump and Kelly.

Since the public sparring between Wilson and the White House began, she’s received backing from her colleagues from the Congressional Black Caucus and others who are demanding an apology.

“General Kelly’s comments are reprehensible,” the CBC said in a statement. “Congresswoman Wilson’s integrity and credibility should not be challenged or undermined by such blatant lies. We, the women of the Congressional Black Caucus, proudly stand with Congresswoman Wilson and demand that General Kelly apologize to her without delay and take responsibility for his reckless and false statements.”