March for Justice: Countdown to Albany 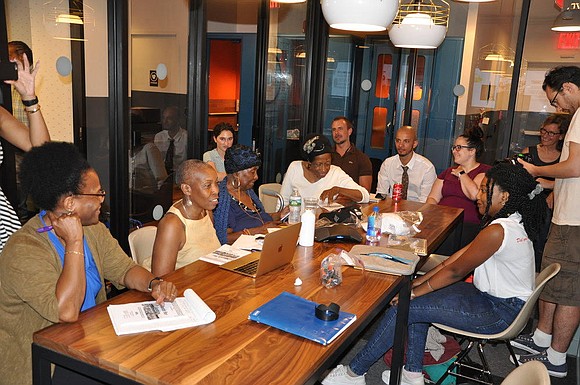 Soffiyah Elijah and others working on the March for Justice Alliance of Families for Justice afj-ny.org photo

A determined group of marchers are approaching Albany, after days of walking from Harlem. This rally is for human rights and against New York State jails and prisons, according to Black Rising Radio host and Alliance of Families for Justice volunteer, Kevin Barron, and the AFJ website. The AFJ rally is planning to arrive at the West Capitol Park in Albany between State and South Swan streets on Sept. 13.

An AFJ flyer also stated the purpose and demands of the march, which include the elimination of “human rights abuses” against people in New York State jails and prisons. The demands are to, “Raise the age of criminal responsibility, increase family visitation to prisons, have a meaningful reform of the use of solitary confinement, end human rights abuses in NY’s prisons and jails and close Attica [in addition to] having a meaningful reform of the parole system, and passing the Domestic Violence Survivors Justice Act.”

The Amsterdam News spoke with Barron about the recent updates concerning the march. He said that there is an average number of 15 to 30 people who are currently participating in the march. March participants settled in New Paltz Reformed Church on 92 Huguenot St., New Paltz, N.Y. on Sept. 4 for a barbecue and potluck dinner followed by the Red Thread Ceremony, Valerie Eagle from the TMI Project and the Mindful Movement by Micah Blumenthal.

For Sept. 5, the participants of the march planned a potluck community meal in the New Progressive Baptist Church followed by self-care and celebration at the Kirkland on Fair Street, Kingston, N.Y.

On Sept. 6, the AFJ marchers settled in Trinity Episcopal Church, 32 Church St, Saugerties, N.Y. for a film screening and discussion about racial profiling and police brutality, followed by freedom songs with Reggie Harris and Rabbi Jonathan.