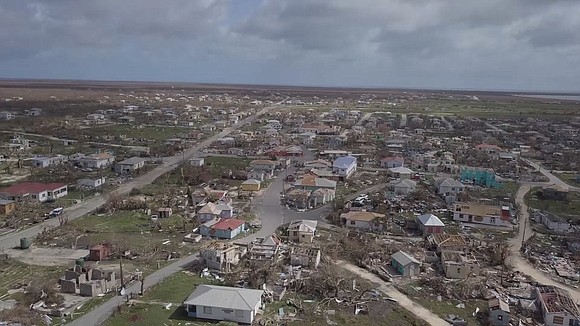 As Texans still struggle to recover from Hurricane Harvey and Floridians wait for Irma’s water to recede and electricity to be restored, drinking water, food, and basic necessities continue to be in short supply for survivors in Caribbean nations devastated by Hurricane Irma. New York City is home to one of the largest concentrations of Caribbean immigrants in the country. Locally, several people are stepping up to bring help to the island nations many call home.

Monday, Bronx Assemblyman Michael Blake collected donations of items to assemble relief packages. Volunteers helped assemble the packages that contained soap, toothpaste, socks, undershirts and other items being sent down to the Caribbean.

As mainstream media continue to center their coverage on the devastation Hurricane Irma left behind in Florida and the Southeast, several Caribbean nations are dealing with an aftermath that has taken them completely off the grid.

Reports indicate that Irma made landfall on Antigua and Barbuda, Saint Martin, Anguilla, Turks and Caicos, Cuba, the Virgin Islands and the Bahamas as the hurricane made its way through the Caribbean and returned to the Atlantic. Destruction left behind has residents struggling to survive as food, water and electricity are scarce.

Islands in the northeastern Caribbean saw winds as high as 185 mph taking down homes and businesses, making for hazardous situations. On Sept. 4, Irma became a Category 5 hurricane. Flooding is also an issues as the storm dumped over a foot of rain in some areas.

As of Wednesday, Irma was responsible for 44 deaths in Caribbean. Thousands have been left homeless, along with others being injured and in need of medical attention. Nations that depend heavily on revenue from the tourism industry are now hazardous disaster areas that could take months even years to recover.

“Barbuda right now is literally a rubble,” Prime Minister Gaston Browne of Antigua and Barbuda said to local media. “The entire housing stock was damaged. It is just a total devastation.”

Elvis Burton said in one interview that he moved back to Barbuda from the Bronx in 2005. His home was damaged and remains boarded up as he continues to clean up. He said people on the island have been helping one another.

“Most of the people left with just the clothes on their backs,” he said. “I want to get back because I want to start to rebuild. It’s sinking in, you’re feeling the impact of the hurricane. After a day or two you realize you have lost everything.”

In Anguilla, reports indicate that 70 percent of electricity poles are down, but there is cellular service. Social media platforms are being used to show the world what people in the Caribbean are dealing with because the mainstream media are not showing it.

Four people died in the U.S. Virgin Islands as Hurricane Irma leveled St. Thomas and St. Croix. High winds destroyed structures as the storm blew through and with few evacuation options, many residents stayed in their homes. The island was left with $2.4 billion in damages.

“My mother and my family had to be dug out from the wreckage,” U.S. Virgin Islands native Darren Brin told the AmNews. He’s trying to get to the islands but is unable to because the airports are closed.

“My family is safe and staying with relatives, but the hospital on the island was destroyed and I want to bring my mother to the states,” he said. “On an island you can’t evacuate. You either stay in your home or you find somewhere else to stay.”