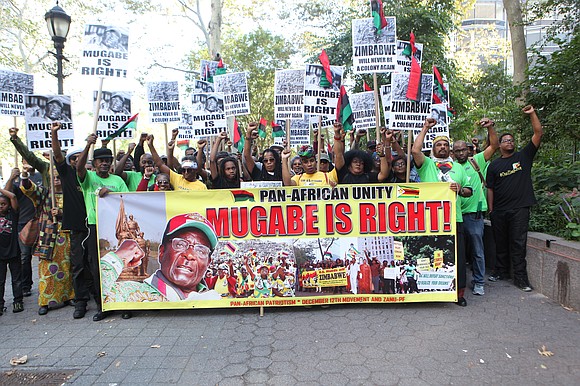 For the past 16 years, the United States has imposed severe economic sanctions on the people of Zimbabwe. A major march and rally in support of Zimbabwe will be held Saturday, Sept. 16, 2017, at noon during the upcoming United Nations General Assembly, led by the December 12th Movement International Secretariat. The march will convene at 53rd Street and Lexington Avenue and proceed to United Nations at Dag Hammarskjold Plaza.

“Zimbabwe remains squarely in the crosshairs of the United States and Great Britain,” said spokesman Omowale Clay. “These Atlantic ‘cousins’ remain committed to reversing the land reform program which returned Zimbabwe’s stolen land to its indigenous inhabitants. These sanctions set a dangerous precedent in Africa, where political independence did not develop into economic self-determination. The U.S. and U.K. are determined to remove President Robert Mugabe and his party, ZANU-PF.”

The goals of ZDERA and its companion sanctions brought by Great Britain and other former colonial powers were to maintain control of the land and secure for the West the vast natural resources of Zimbabwe—gold, diamonds, platinum, copper, coal, nickel, tin, tobacco, cotton, wheat, coffee, sugarcane, etc.

“President Robert Mugabe and the people of Zimbabwe have consistently fought for political and economic independence,” Clay explained. “Control of their land is fundamental. These illegal sanctions infringe on their national sovereignty.”

Chester Crocker, Ronald Reagan’s assistant secretary of state for African Affairs, testified in support of the ZDERA. He said, “The sanctions were to create such international isolation, economic disruption and impoverishment that the people of Zimbabwe would oust President Robert Mugabe and ZANU-PF from power. If this regime change was successful, the British-created opposition, Movement for Democratic Change, would put the country’s economy and resources back in Western hands.

Within the 16 years of sanctions President Robert Mugabe has won two internationally monitored presidential elections in 2002 and 2008 with the vast majority of votes. The economic sanctions are destabilizing the development of the people of Zimbabwe and must end now.”

The December 12th Movement, a U.S.-headquartered international NGO in consultative status with the U.N.’s Economic and Social Council, defends the human rights of African people in the U.S. and throughout the African Diaspora. The organization acts on the credo of Malcolm X, who said that the freedom of African people in the U.S. is inseparable from the existence of a truly independent Africa. Zimbabwe exemplifies that independence.