More than 80 arrested in third night of St. Louis protests 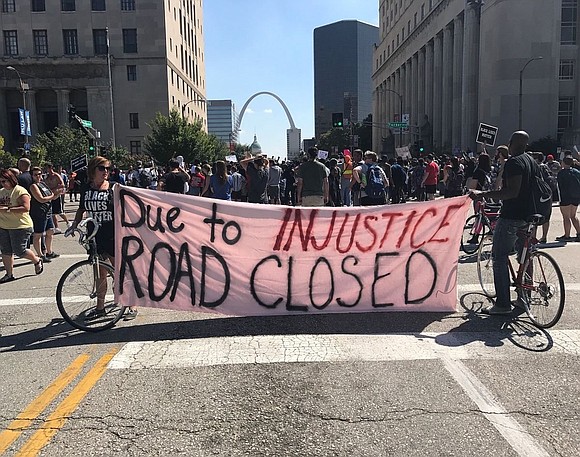 (CNN) -- More than 80 people were arrested after a third night of demonstrations in St. Louis over the acquittal of a former police officer who had been charged with first-degree murder.

"Some criminals assaulted law enforcement officers and threw chemicals and rocks at them. All of the officers' injuries were minor or moderate. All will be returned to duty soon," O'Toole said.

"We're in control, this is our city, and we're going to protect it."

"We saw again that the vast majority of protestors are nonviolent," Krewson said at the media briefing.

"The days have been calm, but the nights have been destructive. After the demonstrations, organizers announce that the daytime protests over. But a group of agitators stay behind apparently intent on breaking windows and destroying property. This is not acceptable," Krewson added.

"We have work to do here in the city. We need more and better opportunities for all our citizens but destruction cannot be tolerated," she said. "Law enforcement has my full support."

It was the third night of demonstrations that began Friday after a former police officer was acquitted in the shooting death of a motorist.

Stockley argued that before firing he had ordered Smith to show his hands and believed the suspect was reaching for a handgun. He said he entered Smith's car to locate the weapon and render it safe. Prosecutors argued that a revolver found in Smith's car had been planted by Stockley to justify the shooting.

In Friday's ruling acquitting Stockley, St. Louis Circuit Judge Timothy Wilson said the prosecution's argument was "not supported by the evidence." The gun was too large, Wilson said, for Stockley to hide it from the cameras at the scene.

The city had been on edge for days during the trial and demonstrations began soon after the acquittal was announced.

On Saturday, peaceful protests also heated up with a group of protesters throwing bricks, rocks and projectiles with paint at police as officers tried to disperse the crowds Saturday. Nine people were arrested.

Some people vented about the court's decision to acquit Stockley, others called for some city leaders to step down.

State and federal authorities did not initially prosecute Stockley, but in the Ferguson protests aftermath, then-St. Louis Circuit Attorney Jennifer Joyce charged him with first-degree murder in May 2016, citing new evidence. Ferguson is a suburb of St. Louis.