Tensions in St. Louis: How did we get here? 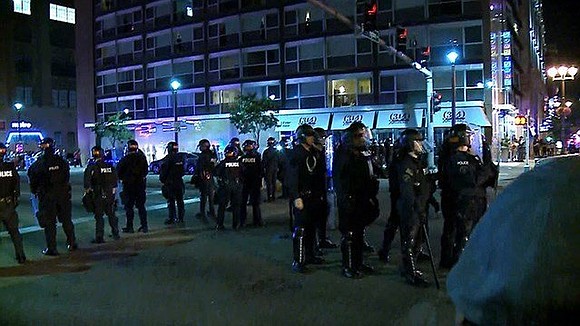 Police arrested more than 80 people and confiscated at least five weapons after a night of unrest in downtown St. Louis KMOV/CNN

CNN) -- Since white ex-St. Louis police officer Jason Stockley was acquitted Friday in the 2011 fatal shooting of Anthony Lamar Smith, a 24-year-old black man, demonstrators have taken to the streets every night. Largely peaceful in the daytime and sometimes turning violent after dark, the protests have reignited the national conversation over race, police conduct and the use of the deadly force.

Protests also broke out in the aftermath of the police shooting of Michael Brown in Ferguson, Missouri, in 2014, and again later that year after a grand jury decline to indict Officer Darren Wilson.

Tensions in St. Louis are likely to persist, given the rarity of convictions for police officers in fatal shootings -- even in high profile cases with strong video evidence. Here is an overview of the events that brought St. Louis to this moment:

On December 20, 2011, Stockley, then a member of the St. Louis police force, and his partner, Brian Bianchi, tried to stop Smith after witnessing what they believed to be a drug transaction in a restaurant parking lot, according to a police report obtained by the St. Louis Post-Dispatch, a CNN affiliate.

Bianchi told Stockley that Smith was reaching for a weapon, the report said. Stockley got out of the police SUV, carrying his department-issued handgun, and his personal AK-47 pistol, a violation of department policy, according to a criminal complaint.

But Smith tried to drive away, knocking Stockley sideways. Stockley fired several shots at the vehicle, the report said.

With Bianchi driving, the officers chased Smith at speeds of more than 80 mph before the police vehicle crashed into Smith's Buick, according to a criminal complaint.

Smith was alive after the crash, and officers approached his car with their weapons drawn. Stockley ordered Smith to show his hands, believing Smith was reaching for a handgun between the passenger seat and the center console, according to an internal report.

Stockley fired five times into the vehicle, hitting Smith in the chest.

Stockley said he returned to his police SUV for supplies to give Smith first aid, but it was too late by the time Stockley got back to the Smith's car. Stockley entered Smith's car "to locate the weapon and render it safe," and removed ammunition from the silver revolver, he said in the report.

Only Stockley's DNA was found on the gun he said belonged to Smith, the criminal complaint said.

The shooting made few headlines nationally.

Neither officer was charged. In 2013, Stockley left the St. Louis Metropolitan Police Department.

A year later, another shooting sparked protests in Ferguson, a suburb northwest of St. Louis.

Protestors quickly took to the streets, clashing with police, who used tear gas and rubber bullets to disperse the crowd. A movement that grew out of the Trayvon Martin shooting in 2012, #BlackLivesMatter, became an integral part of the protests that gained national attention.

Protests erupted again in Ferguson and across the nation after a grand jury declined to indict Wilson on November 24, 2014.

Wilson ultimately resigned from the force. Thomas Jackson, the police chief of Ferguson at the time of Brown's death, also resigned in March 2015 following a scathing Justice Department report that found systemic racial discrimination by Ferguson police and court system against African Americans.

Brown's death and the protests surrounding it also renewed interest in the Jason Stockley case. "Without the Mike Brown case ... the prosecution of Jason Stockley never would have happened," CNN's Thomas Lake wrote.

In May 2016, then-St. Louis Circuit Attorney Jennifer Joyce charged Stockley with first-degree murder, citing new evidence. Stockley pleaded not guilty and waived his right to a jury trial. His fate was now in a judge's hands.

Dramatic footage captured in the shooting's aftermath -- from the police dash camera, an internal vehicle camera and a cell phone video -- played a central role in Stockley's trial. Prosecutors also argued the ex-officer intended to kill Smith, citing audio caught on an internal police vehicle camera during the chase in which Stockley told his partner, "We're killing this motherer."

Prosecutors also argued Stockley planted the revolver in Smith's car to justify the shooting. But the gun was never seen on any of the footage from multiple cameras that captured Stockley and other officers at the scene.

Prosecutors said that footage appeared to show Stockley rummaging through a bag in the back of a police vehicle, arguing that was the moment when Stockley retrieved the weapon. Prosecutors also said Stockley's DNA was found on the weapon.

Before the verdict was announced, Smith's fiancée urged the community to avoid violence.

"However it goes, I ask for peace," Christina Wilson said at a news conference with the city's mayor Eric Greitens.

In his ruling on Friday, St. Louis Circuit Judge Timothy Wilson said the prosecution failed to prove that Stockley did not act in self-defense.

"This court... is simply not firmly convinced of the defendant's guilt," Wilson wrote in his 30-page decision.

After the verdict, St. Louis Circuit Attorney Kimberly Gardner said she was "disappointed" by the decision.

"It feels like a burden has been lifted, but the burden of having to kill someone never really lifts," Stockley later told the St. Louis Post-Dispatch.

Protests began immediately in St. Louis. Protesters and activists blocked highways and marched to the St. Louis police headquarters, calling for police resignations and an economic boycott of the city, the St.Louis Post-Dispatch reported.