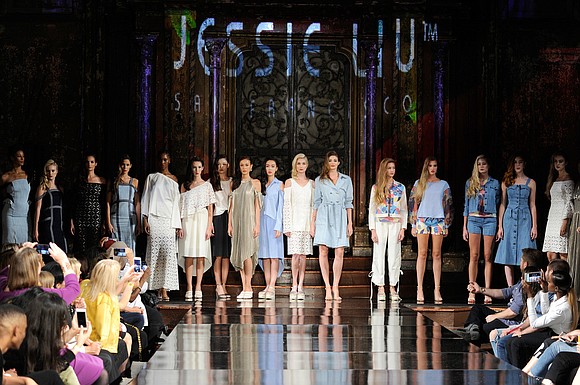 Art Heart Fashion recently kicked off their New York Fashion Week shows with a spectacular display of international and national talent. The opening night featured six designers, each telling very different stories in the individual collections, yet they all complemented each other. They provided guests with a variety of different styles from around the world.

The show opened with a performance by Sarah Charness, who rocked the house while playing her electric violin. Folks in the audience were dressed in classic attire that added to the rock and roll vibe. First up was Kawaiti designer Mashael Al-Mutawa whose Design ME featured handbags by NNJ Designs. This classic yet stunning collection was a perfect way to celebrate traditional fashion with an international flair. Next was Purvi Doshi, direct from India. Her fashion journey has lead her from a small basement shop to a two-story, stand-alone flagship store in India’s fashion district. The collection was an amazing spin on traditional attire. Closing the 7 p.m. segment was celebrity designer Dexter Simmons. His journey has lead him from a top finalist on “Project Runway” to a celebrity designer who’s rocking out street clothes with an edge.

The 9 p.m. showcase opened with a performance by hip-opera singer Charisse Mills, whose voice resonated throughout the cathedral and set the tone for the classic and edgy group of designers to follow. Opening designer Jonathan Marc Stein presented a modern, yet edgy, eveningwear collection. He was followed by Datari Austin from the U.K., bringing a European influence to his evening styles. Designer Jessie Liu from San Francisco closed the shows for the night.

Overall there were 40 designers showing at the Angel Orensanz Foundation event space in Manhattan’s Lower East Side, the home of Art Hearts. Hair styling was led by Woody and Amy Michleb, the backstage hairstyling team. The April Love Pro Team created the beauty looks with products from Danessa Myricks, Cozzette and Bdellium Tools.

This season Liu was inspired by the spontaneous moments encountered when traveling with loved ones, the authenticity, friendship, affection and joy. Balloons, sunshine, clouds and sandy beaches are all the experiences that one encounters that are worthy of family albums.