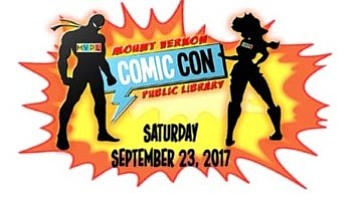 The Mount Vernon Public Library has been the Central Library of Westchester County for 60 years. The library is hosting its first ever Comic Con, an event it says will have something for comic book fans of all ages. Marvel Comics cover artist André LeRoy Davis, known as hip-hop’s official cartoonist, will be on hand as our invited celebrity artist. Cosplay, dressing up as a character from a movie, book or video game, especially one from the Japanese genres of manga and anime, is a very popular attraction at comic cons worldwide. Our cosplay contest is sure to be a smash, so get your best voices and moves ready. We’ve got activities planned for both kids and adults, so pack up the whole family to join us for some awesome fun.

Meanwhile, the library declares that it has the largest collection of research and reference books of all the Westchester public libraries and services patrons from throughout the county. The Library Board of Trustees, Library Director Evania Thompson, library staff and community advocates have been on a mission to retain the library’s designation as the Central Library of Westchester County.

Advocates say, “While there will be no period of public expression our presence will send a strong message to the Westchester Library System Board of Trustees that we care about our library and we will fight to retain our central library status to the end. We encourage not only members of the Mount Vernon community to be in attendance but also that of our community leaders and prospective community leaders.”