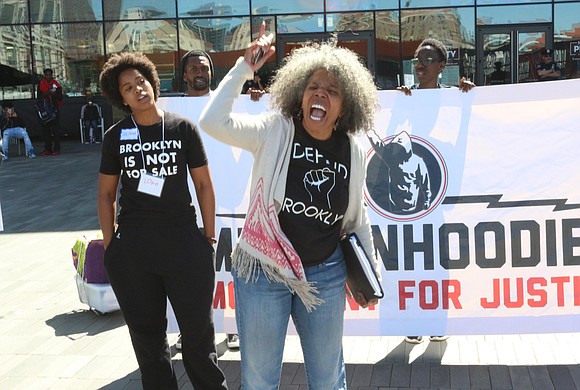 Hundreds of protesters packed Brooklyn Saturday morning in a rally against gentrification, violence and racism calling out Brooklyn’s elected officials ahead of Tuesday’s primaries.

The Brooklyn Anti-Gentrification Network, an activist group resisting the displacement of low-income minority communities, hosted the first-ever Brooklyn march protesting the city’s longtime overhaul of Black and Brown neighborhoods from the Barclays Center to Myrtle and Wyckoff avenues.

Protesters chanted, “Before its gone, take it back! Brooklyn’s not for sale!” as they held a black and white banner that read, “Take Bushwick Back!” At least 90 grassroots groups and local organizations endorsed the protest.

Community groups and residents alike are fed up with a wave of elected officials who support city developers. Protester’s called out City Councilwoman Laurie Cumbo, who represents the 35th District in Brooklyn covering Fort Greene, Clinton Hill, Prospect Heights and parts of Crown Heights and Bedford-Stuyvesant.

“What are our politicians doing?” asked Alicia Boyd, a lead organizer of the Movement to Protect the People and spokeswoman at BAN.

She continued, “They are just fumbling opportunities to build wealth for the 1 percent. Laurie Cumbo is in one of the hottest district’s now that is being targeted for development ... She needs to stop taking money from developers and focus on the actual needs of the community.”

For months, observers have charged that Cumbo vacillated on a clear position on the Bedford-Union Armory Project, a deal that would transform the armory into mixed-use luxury apartments, with few affordable units available to the community. Cumbo has since condemned the controversial deal.

Protesters, however, argued Saturday that she is pro-development and a “sellout” to minority and low-income communities.

“This is about profiting off the backs of working class and people of color,” said Imani Henry a community activist from Flatbush and spokesman at BAN. “We’re fighting for our very lives.”

BAN alleged that the 78th Precinct in Brooklyn denied them a sound permit 18 hours before the protest, according to a statement on the group’s website. According to BAN, the NYPD said there was a pending event at the Barclays Center.

“One of the main pit bulls of gentrification is the New York City Police Department,” said Shannon Jones, 41, of Why Accountability in the Bronx. “If someone in the community is brutalized by the police, I’m affected by that because it creates a sphere of terrorism in the community.”

LaShaun Ellis said redevelopment in her community has priced out her neighbors.

“I’ve seen neighbors and friends go through abuse from their landlords,” said Ellis, 36, of Crown Heights, Brooklyn, who held a sign that read, “Vote Laurie Cumbo Out.” “Across the street from me there is an apartment building and they put up scaffolding. They started painting the bricks and they are harassing tenants.”

Ellis added that although gentrification hiked prices in the area, she enjoys the nearby the new bistros that are outside of the Caribbean enclave.

Alyssa Hassell, 27, of the Student Planning Action Network at Hunter College, said that she is worried that she will be completely priced out of her community.

“I don’t feel like I have a future in my city,” she added. “I have seen my rent go up year after year.”