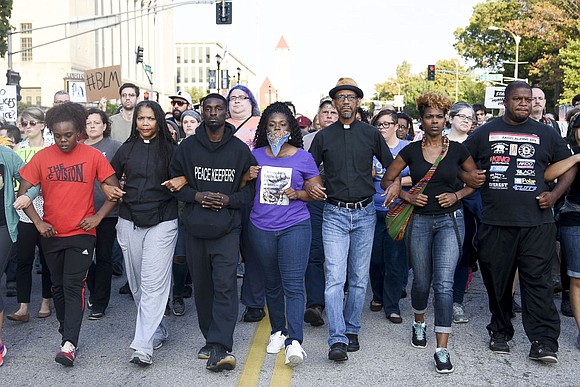 St. Louis is yet again the epicenter in the nation for protests and demonstrations in the wake of another white police officer being acquitted in the killing of a Black man.

The uprising is in response to the not guilty verdict that was handed down last Friday to former St. Louis police officer Jason Stockley. He faced first-degree murder charges for the killing of Black 24-year-old Anthony Lamar Smith in 2011.

Stockley fatally shot Smith after Stockley and his partner observed Smith allegedly involved in a drug deal. Smith drove off and a car chase ensued. During the chase, dashcam video recorded Stokley saying he was “going to kill this [expletive], don’t you know it.”

The officers approached the vehicles and Stockley yelled at Smith. Stockley testified that Smith reached around inside the vehicle for what he believed was a gun. Stockley shot Smith five times, killing him.

Although a handgun was found in Smith’s vehicle, prosecutors said Stockley planted the gun in the vehicle. There was no trace of Smith’s DNA on the weapon but Stockley’s DNA was on the weapon.

“Stockley committed a murder and he gotta be withheld for his actions,” Smith’s brother Atwan said in one interview. “All the actions that he did he gotta be held accountable for…We need justice for Anthony Smith. The justice system, they don’t care about us. We out here, these laws not made for us.”

Adding insult to injury, the Department of Justice announced Monday they had no plans to prosecute Stockley for civil rights violation.

“The United States Attorney’s Office declined prosecution of this matter in November 2012, and notified Mr. Smith’s family of their decision at that time,” Department of Justice spokeswoman Lauren Ehrsam said in a statement. “The Civil Rights Division concluded its own internal review and analysis in September 2016, and agreed that the evidence did not support a prosecution under federal criminal civil rights statutes.” Protest began in St. Louis shortly after the verdict was announced. Over the last several days, a reported 165 people have been arrested and 11 have been injured. Demonstrators have clashed with police and the Missouri National Guard.

“This was an open and shut case to me,” protester Gwendolyn Cogshell said in one report. “It was like Rodney King. Everybody saw what happened on TV and heard was what said.”

Over the weekend, protesters marched through a shopping center in the suburb of Des Peres and 23 businesses saw damage by nightfall. Approximately 1,000 people protested outside police headquarters. Approximately 125 people were arrested.

“Many of the demonstrators were peaceful,” said Police Chief Lawrence O’Toole. “However, after dark, many agitators began to destroy property and assault police officers. Frustration, anger, hurt, pain, hope and love all intermingle.”

Police in St. Louis have been accused of misconduct during the protests. Reports indicate that officers were heard chanting, “Whose streets? Our streets!” at protesters. Activists have used the chant during demonstrations to protest law enforcement.