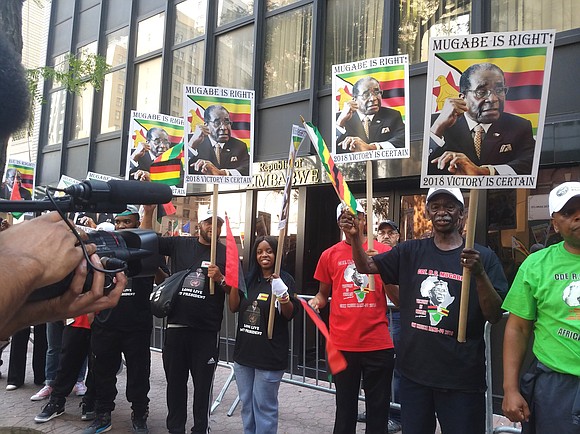 Robert Mugabe, president of the Republic of Zimbabwe, will address the United Nations General Assembly Thursday, Sept. 21, and a Zimbabwe support rally will be held at Dag Hammarskjold Plaza, 47th Street and First Avenue, at 3 p.m.

The U.N. General Assembly opened Saturday, as a tremendous march and rally in support of Zimbabwe and demanding an end to the economic sanctions imposed by the United States and Britain was being held.

“The people of Zimbabwe have continuously declared their overwhelming support for President Robert Mugabe and their national liberation party, the Zimbabwe African National Union-Patriotic Front, and with upcoming elections scheduled for 2018, the current leadership is poised to continue their role as manifested in their current slogan ‘Victory is certain!’” declared Omowale Clay of the December 12th Movement International Secretariat, as he led the march through midtown to the Zimbabwe Mission and on to the United Nations. “You see, only the people of Zimbabwe can say who their leaders are.”

“President Mugabe is a leader of African people around the world,” said Clay. “His vision and actions set an example for African political and economic independence. Zimbabwe land reform program, which returned the land to the people, his indigenous economic policy and his love and faith in the people of Zimbabwe are a testament to the freedom of all African people.”

Clay declared, “Zimbabwe will never be a colony again! End the sanctions now!”