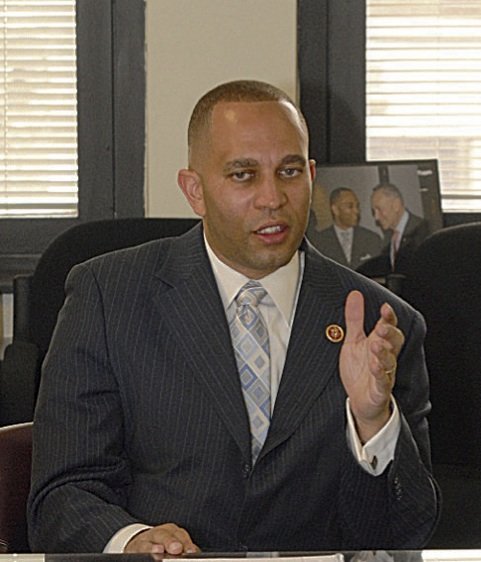 (CNN) -- Rep. Hakeem Jeffries says that Donald Trump's response to the violent protests in Charlottesville, Virginia, led many Americans "to conclude that the President of the United States chose to pull the sheets off and reveal himself."

The Democratic congressman from New York made the remark Monday in an interview with Wolf Blitzer on CNN's "The Situation Room."

Jeffries was asked by Blitzer to compare the President's reaction to NFL players protesting racial injustice with Trump's response after a white supremacist rally in Charlottesville last month led to clashes and a death.

"(Trump's) reaction to Charlottesville was clearly inadequate, unacceptable, inappropriate, and for many people throughout America, led them to conclude that the President of the United States chose to pull the sheets off and reveal himself, in terms of his tendency to be a racial arsonist, fanning the flames of hatred," Jeffries said.

Jeffries told Blitzer that he doesn't believe all of Trump's supporters are racist. "That is not the case, but his behavior is deeply troubling to Americans of all race and religious backgrounds who believe in the values of tolerance, decency and diversity," Jeffries said.

"Are you suggesting he's a racist?" Blitzer asked.

"No," Jeffries said, "He's a racial arsonist. He uses race to advance his own ends -- that's troubling."

In August, Trump said that "both sides" shared blame for the violent protest in Charlottesville that left counterprotester Heather Heyer dead.

"In that context (Trump) suggested there was violence on 'all sides,' when we understand it was neo-Nazis, it was the KKK who were responsible for the loss of life of one courageous American and the damage that was done to so many others," Jeffries said.

Blitzer asked Jeffries to clarify his "pull the sheets off" comment, an apparent reference to Ku Klux Klan regalia.

Jeffries replied: "Time and time again, (Trump) has refused to distance himself from individuals like David Duke -- an avowed white supremacist -- as well as others, for reasons that many of us can't figure out."

"We know that Donald Trump has a history of fanning the flames of racial hatred using stereotypes to advance his own personal and political agenda. For five years, he perpetrated the racist lie that Barack Obama was not born in the United Stated of America and then rode that lie into the White House, which is why we're all being subjected to what we're dealing with right now," Jeffries said.

Regarding Trump's statements about players taking a knee or otherwise protesting during the national anthem, Jeffries said, "It's in this atmosphere that we find it troubling, with all that's happening in the world and in the country, Donald Trump would choose to go after a few black athletes in the NBA and the NFL."