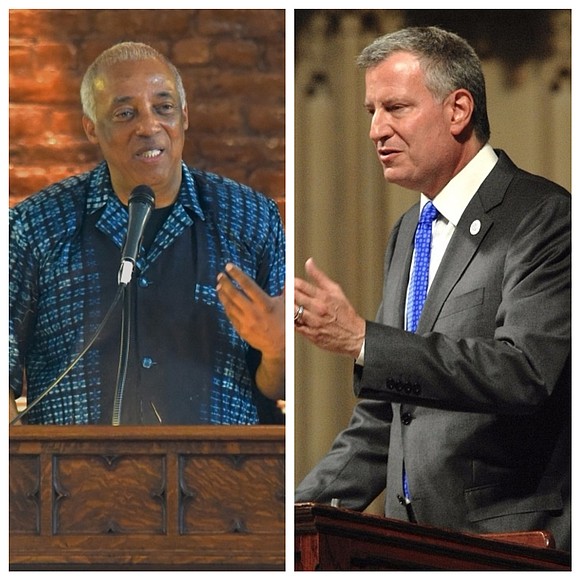 It was disingenuous, self-serving and political opportunism for Mayor Bill de Blasio to request our local Council Member Inez Barron to host him in a town hall meeting in East New York, Brooklyn one month before the general election. The council member and I will not be attending the mayor’s East New York town hall meeting, and we have released the following joint statement.

We consider the mayor’s request for the council member to hold a town hall meeting in our East New York district a month before the general election disingenuous, self-serving and political opportunism. The mayor and the Democratic Party were criticized for the low voter turn-out in the Democratic Party Primary. Town hall meetings have been traditionally used by Democratic Party politicians before elections to increase voter turn-out and support for political campaigns, even if they are a shoe-in to win the election. The mayor already knows the needs of our district. He doesn’t need a town hall meeting, he just needs to deliver to our district the projects and programs that have already been brought to his attention.

The needs are the following:

• Support for our community

• Support for our schools

(This is a partial listing.)

We will be glad to host a “mayoral report back to the community meeting” after the election so that the mayor can report to our community all of the projects and programs that he has delivered to our community. We will not host a political photo-op and community ventilating session. It’s time to deliver, mayor!

Remember, this mayor is the mayor who supported, along with Council Member Rafael Espinal, the East New York Rezoning Plan that will gentrify the northern section of our district. The mayor supported the plan, even though Community Board Five, the borough president, the State Assembly member and the City Council member said “No.” He defied us all!

Remember, this mayor is the mayor who hired Giuliani’s racist police commissioner Bill Bratton, who is the architect of the racist broken windows theory (arrest Black and Brown people for minor offenses so they won’t commit major crimes) and the racist stop, question and frisk policy (racial profiling) and who defended and supported killer cops (cops who killed Nicholas Heyward, Anthony Baez, Anthony Rosario and Hilton Vega when Bratton was under Giuliani).

Remember, this mayor is the mayor who supported, when he was a council member, mayoral control of our schools for Mayor Bloomberg and now for himself. Our schools are failing our children. Despite the mayor’s claims of improved test scores and increased graduation rates, the bottom line is that upon graduation, an overwhelming number of our children are not prepared for college or a career. These are the facts! This neglect makes our children susceptible to the pipeline to prison. Mayor, do the right thing and deliver for our people!

We take this stand because of our deep core commitment to our people’s liberation. We must always expose the contradictions and speak truth to power. We remain unchained, unbought, unbossed and deeply in love with the masses! Forward ever!

A press conference will be held Sunday Oct. 1 at 3 p.m. at P.S.13, located at 557 Pennsylvania Ave., between Lavonia and Riverdale avenues in East New York.