A homegoing of music for Sarah McLawler Kimes 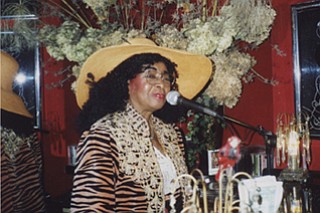 From the opening organ prelude with Donald Smith at the keyboard and Carol Sudhalter on baritone saxophone in a rendition of “Caravan” to a collective singing of “This Little Light of Mine,” led by Antoinette Montague, who officiated the funeral services, Sarah McLawler Kimes rested in a familiar milieu of music.

McLawler Kimes, who passed Sept. 12 at 91, would have loved the celebration of her life last Wednesday morning at Benta’s Funeral Home in her beloved Harlem. Those assembled at Benta’s with a memory of her fantastic way with a song could probably hear her comping behind the flute duo of Carol Sudhalter and Andrea Brachfeld as they exchanged riffs on “There Will Never Be Another You.”

And there will certainly never be another Sarah McLawler Kimes, and in music and words her remarkable life was recalled by representatives from the Eastern Star, where she was a member with the Supreme Grand Chapter of America and Order for 75 years. “She walked and talked with us,” a representative for the order said.

But it was from behind the piano that she spoke to most of her fans and followers, and many of them remember her, bedecked in colorful hats and playing without any shoes on at Chez Josephine.

She was born Aug. 9, 1926, in Louisville, Ky. Her father, the Rev. Vol William McLawler, founded the Mt. Linden Baptist Church, and her mother, Lela Yvonne Talley, was a gospel singer and musician, which in part explains McLawler Kimes’ musical prowess and spiritual outlook.

At a very early age her musical gifts were abundant, and after tutelage by Vesterine Slaughter, McLawler Kimes earned a scholarship to study at the Jordan Conservatory of Music in Indianapolis, where the family had moved. It was at the Sunset Terrace that she began her professional career, performing with the Jean Pope Orchestra. This performance began her association of sharing the bandstand with such illustrious musicians as Charlie Parker, Billy Eckstine, Gene Ammons and the International Sweetheart of Rhythm.

Perhaps vocalist Annette St. John was thinking about the club when she sang “Canadian Sunset,” with Bertha Hope at the piano and Sudhalter on flute.

After moving to Chicago and between gigs, McLawler Kimes continued her study of music at Fisk University. It was in Nashville during a performance at the renowned State Street that she met Hetty Smith in 1948 and they formed the Syncoettes, an all-women’s band. The group’s recording of “The St. Louis Blues” earned them wide recognition and a date at the Theresa Hotel in Harlem.

McLawler Kimes was well-versed in the music of Duke Ellington and it was hard not to think of her when Jean Davis (trumpet) and the flute duo delivered their version of “Satin Doll.”

During his eulogy, the Rev. Isaac B. Graham of Macedonia Baptist Church on 147th Street in Harlem echoed the words of McLawler Kimes’ sister, the Rev. Daisy Thompson, reciting that “she believed in the Word.”

And she believed in the music, like many of the musicians who attended the services, including James Carter, Melba Joyce, and drummer Annette Aguilar and bassist Kim Clark, both of whom performed on several numbers.

Sarah McLawler Kimes, who will be interred at Calverton National Cemetery, is survived by her sister, the Rev. Thompson of Fort Worth, Texas, and her sister, Dr. Johana Hudson of Chicago; and her daughter Janis Otto Bacon of South Carolina; and her son, Mansfield Richard Otto of New York.