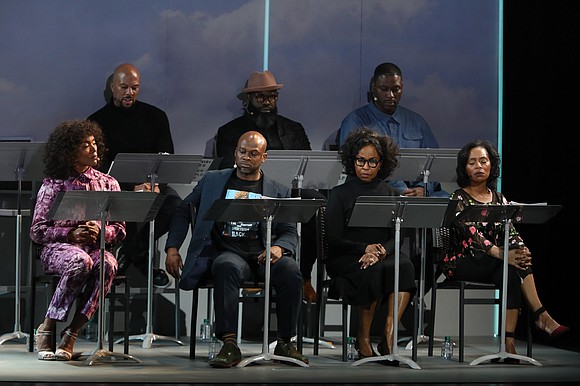 In part theater, part lecture, part sermon, Angela Bassett, Joe Morton, Michelle Wilson, Common, Marc Bamuthi Joseph, Greg Reid, Tariq Trotter and Pauletta Washington brought the words of Ta Nehisi Coates’ “Between the World and Me” to more fierce, focused, defiant, dignified life Monday night at the famed Apollo Theater before a packed audience that included luminaries such as legendary actress Leslie Uggams. Boldly delivering a staged reading of Coates’ award-winning book, the coterie of performers took turns behind a trio of clear, Plexiglas podiums, sometimes two at a time, to deliver various excerpts of the treatise. At other times they did their monologues seated behind music stands onstage left, seeming simultaneously like an orchestra as well as choir. Ta Nehisi Coates himself wrapped the evening with a surprise appearance, humbly yet delightedly taking to the stage amid rousing applause, for the final recitation.

Coates’ book with its trenchant, unflinching look at race as experienced by Blacks in the United States, created a seismic movement in public discourse around the subject when it was released in 2015. A memoir and extended letter to his adolescent son, it also functions as a travelogue of Coates’ life as he experienced it in different locations of the world: West Baltimore, where he grew up; Washington D.C., where he attended historic HBCU Howard University; New York City, where he moved with his wife and struggled to launch his writing career; and Paris, which broadened his notions of exactly what the African diasporic community truly is.

Director of the production, Kamilah Forbes, attended Howard University at the same time as Coates. She was inspired to do it because she says, “This book introduced a very urgent conversation. I thought it was important that our community engage it.” The cultural significance of the book made it easier to get the illustrious cast on board. “We extended the invitation,” Forbes explains, “and it was as simple as that. Also I think people want to be a part of this conversation. There were definitely folks who were big fans of the book when it came out and big fans of Ta Nehisi Coates’ writing and thought an opportunity to embody his language shouldn’t be missed.”

The creative team of scenic designer, Michael Carnahan; video projection designer, Tal Yarden; and lighting designer, Jane Cox are to be commended for their masterful use of light and imagery to enlighten and enhance, yet not overpower, the performers or the words. Video, abstract still images and photos provided a backdrop that provided emotion and context. Some images were iconic, such as the famous photo taken by New York Times photographer Dan Hogan Charles of Malcolm X brandishing a rifle as he discretely peered out of a window in his home. Others were personal, such as images of Coates embracing his young son.

Much of the material used for the production was culled from sections of the book dealing with Prince George’s County, Md., in the same state in which Coates was raised and in close proximity to Howard University. These excerpts were particularly affecting to attendee Debra McIntyre, a Brooklyn resident who works in the theater industry. “It was just so amazing,” she says, “that they spoke about places that I know. I have family in Prince George’s County. So that was really something to hear how we as a people are still struggling. Will it ever end?”

The production was scored by award-winning musician Jason Moran who on piano, along with Mimi Jones on bass, and Nate Smith on drums, provided a moving aural journey to complement Coates’ words as the actors shifted from monologue to dialogue to call-and-response and back throughout the performance.

The evening came to a crescendo a little more than midway through when rapper and producer Common took center stage beside Tariq Trotter, aka Black Thought. Both were clothed in all black, Trotter accessorizing with a tan fedora and sunglasses. The duo’s emotional rap elicited cheers from the audience and a spontaneous thrust of her fist in the air from Bassett, at its fiery conclusion. Indeed, much of the evening was marked by reflexive nods of recognition, guttural “hmms” and the side-to-side shaking of heads unable to wrap themselves around some of the horrific truths being lobbed from the stage. Harlem resident Jennifer Jones remarked, “There’s something sort of schizophrenic in terms of being part of this space of beauty and talent. The pain that we’re reminded of in such a beautiful way, in this author’s words really details that hurt, that pain, that ugly history between the world and us that’s really hard to put into words.”