Schools get a boost in Cuomo’s new budget 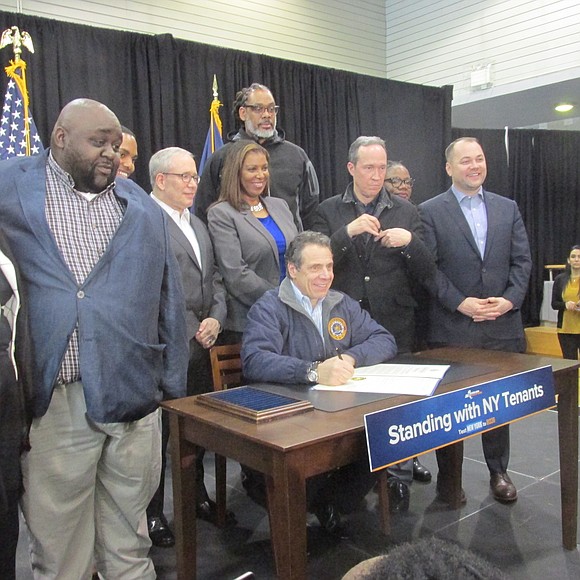 Over the weekend the New York State legislature agreed on a budget for the upcoming fiscal year. Leading up to the vote, New York State Gov. Andrew Cuomo made promises to increase funding to education and actually boosted aid beyond his initial proposal.

Overall, the budget adds $1 billion in funding for education, which brings school spending to $26.7 billion. It includes a $50 million increase in aid to community schools, a $15 million increase to expand pre-K programs, $1.5 million for adult-literacy education and $500,000 for a teacher-diversity, pipeline pilot.

“Thanks to the leadership of Governor Cuomo, Seånate Majority Leader Flanagan, Coalition Leader Klein and Speaker Heastie, New York’s children are better off,” said Sedlis in a statement to the AmNews. “New York invested in both district and charter schools in a manner that will significantly help to educate all public school children. Charters have been educating kids at 75 cents on the dollar with higher outcomes for far too long, and this year’s budget increases will begin to address that gap.

But others feel like Cuomo’s actions toward education aren’t good enough in an environment where test scores are king.

According to Gripper, this is because the governor rejected the State Assembly’s proposed tax hikes on people earning more than $5 million a year and its plan to increase school aid by $1.5 billion.

Criticism of the governor’s education budget didn’t just come from activists. Gubernatorial candidate Cynthia Nixon blasted Cuomo for alleged abuses of power through deals not seen by the public.

“Under Andrew Cuomo, the state budget process has routinely become known as the ‘Big Ugly,’ and this budget sounds like it will be particularly ugly for everyday New Yorkers,” said Nixon in a statement. “Instead of an open and transparent process with a public debate on the issues, Cuomo’s budget cobbles together a series of backroom deals. Governor Cuomo’s unprecedented power to veto local school budgets is being decided without any input from local voters or parents.”

The budget also includes legislation that requires all public and charter schools to provide free, feminine-hygiene products in restrooms for students grades 6 through 12. Initially proposed as part of Cuomo’s “Women’s Agenda For New York,” lawmakers promised him in January that it would be included in the budget.

In another positive development, the state budget Cuomo signed makes K through 12 schools that buy 30 percent of their lunch ingredients from New York farms eligible to receive a statement reimbursement of 25 cents per meal. That’s four times the amount currently provided. The budget also doubles state funding for Farm-to-School grants to $1.5 million.

“Expanding market opportunities is especially important in a challenging agricultural economy, and both farmers and our young people will benefit by getting more fresh, healthy food onto school lunch plates across the state,” said David Fisher, New York Farm Bureau president, in a statement.

The new budget also approved a mandated large-scale expansion for school-breakfast participation across the state. Cuomo hopes to ensure that the 70 percent or more of public school children eligible for lunch are eligible for subsidized meals. According to data analyzed by the organization Hunger Free America, more than 700,000 children statewide live in households that can’t always afford enough food.

“This is a historic victory for the anti-hunger movement, and we greatly thank Governor Andrew Cuomo for proposing these vital efforts and the Legislature for approving them,” said Joel Berg, CEO of Hunger Free America, a nationwide direct-service and advocacy organization based in New York City. “Mountains of data prove that increasing breakfast participation not only slashes child hunger, but it also boosts child health and improves educational performance.”