Winnie Madikizela-Mandela, “Mother of the Nation,” dies at 81 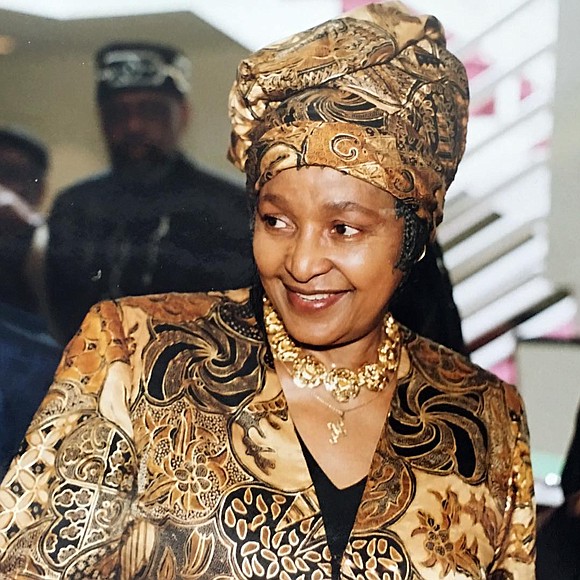 “I am a living symbol of whatever is happening in my country,” Winnie Madikizela-Mandela wrote in “Part of My Soul Went With Him.” That once vibrant, resilient symbol, sometimes called the “Mother of the Nation” in South Africa, died Monday, according to her personal assistant Zodwa Zwane. She was 81.

It was reported that Madikizela-Mandela had been battling illness, and Zwane said more details would be released later. She had been in and out of Netcare Milpark Hospital in Johannesburg for several years for treatment of a kidney infection, said her spokesman, Victor Dlamini.

“Although we are gutted by her passing, we are grateful for the gift of her life,” was a message from her family.

This “Mother of the Nation,” the family said “succumbed peacefully in the early hours of Monday afternoon surrounded by her family and loved ones.”

Calling her a “champion of justice and equality” and a “voice for the voiceless,” President Cyril Ramaphosa announced that Madikizela-Mandela will be remembered at an official memorial service April 11, and honored by a state funeral April 14, 2018.

No gift from Madikizela-Mandela was as significant as her unflinching resolve against the apartheid system that stifled so much of Black hope and aspirations in South Africa.

She was the epitome of a no-nonsense, fierce and self-determined African woman. She remains a heroine to millions. Rep. Maxine Waters said in an online statement, “I mourn the loss of my dear friend & one of the greatest leaders and activists in the world: Winnie Mandela. I worked w/ her on the release of N. Mandela & to end apartheid in South Africa. We should all pay tribute to Winnie’s persistence in the face of injustice & racism.”

“We African women love the great Winnie Madikizela-Mandela,” said activist Lady Agbiomon Ogbeiwi. “We simply sympathize with her for what she has suffered throughout these years.” The former Nigerian broadcaster and current cultural activist added, “She kept Nelson’s name alive in the 27 years he was in prison, and she kept the movement vibrant throughout that whole time, even though he abandoned her, remarried and did not actively support her through all the trials and tribulations those people put her through. We should remember her for the good work she did. She was always there. She was a fighter and she never quit. Everything she believed in for the freedom of South Africa, she continued till her death. They persecuted her and yet she persevered greatly.”

“It is with great sadness ... that we heard the news that Winnie Madikizela-Mandela, the mother and the heartbeat of the revolution, had passed,” said Minister Louis Farrakhan. “When I visited South Africa, I said to myself ... that South Africa is not yet free. … Mother Winnie Mandela in our meeting said to me that the enemy’s promises of tens of thousands of homes and electricity were never realized. A political compromise for the sake of nonviolence was made so we would gain political power, a national anthem, a flag and a place at the United Nations. But, the yet unrealized dream of the ownership of the wealth of South Africa returning to the Blacks remains. Mother Winnie Mandela still was the heartbeat of the revolution. And today under a new president with new vision, the compromise has ended and the struggle begins anew and again. ... The heartbeat of the revolution will continue until every square inch of South Africa is liberated and once again in the hands of the original owners of that land. Mother Winnie Mandela and the struggle that her husband and she waged [will] always be remembered. ... She lives and the struggle continues until total victory.”

From the moment Winnie Madikizela-Mandela married Nelson Mandela in 1958, she knew she had “married the struggle, the liberation of my people.”

She had first seen Nelson Mandela in the Johannesburg Regional Court, where he was representing a friend of hers. Later, she was formally introduced to him by Oliver Tambo, Nelson’s law partner, who came from her village of Bizana in the Transkei, a Bantustan. Nelson was married and 16 years older than Winnie.

They barely had time to consummate their marriage because Nelson had been accused of treason and was on trial. When passes were denied to the wives of the prisoners Madikizela-Mandela joined the protests. She had been working at Baragwaneth Hospital as the first medical social worker in the country. “But after I was arrested, I lost my job,” she wrote.

The arrest and her subsequent affiliation with other women brought her into the Federation of South African Women, with a leadership position similar to the one she had forged in ANC Women’s League.

At the end of the treason trial in 1961, Nelson Mandela went underground and that was the last she would see of him for years. “I had so little time to love him, and that love has survived all these years of separation,” she wrote in 1984.

In 1962, Madikizela-Mandela began serving 20 years of banning by the South African government. The charge against her was that she was the wife of Nelson Mandela. Along with her activism, particularly the campaign to free her husband and the other political prisoners, she had to care for her two children, Zeni and Zindzi. Then there was the persistent harassment from the agents of apartheid. Madikizela-Mandela endured 17 months of solitary confinement in the Pretoria Central Prison.

A year after her participation in the Soweto Uprising in 1976, she was banished to Brandfort, a Black township. It was not until 1984, while Nelson Mandela was in Pollsmoor Prison, that the couple had a chance to see and touch each other.

Six years later, they walked hand-in-hand from Cape Town’s Victor Verster prison, Feb. 11, 1990. With her free hand, Madikizela-Mandela gave the crowd a clenched fist, Black Power salute. Twenty-seven years of incarceration and separation had kept them apart but united in their struggle for total liberation. In 1994, Nelson Mandela was elected president, the first Black South African to achieve that plateau.

A freed Nelson Mandela was confronted with Madikizela-Mandela’s predicament stemming from her association with the Mandela United Football Club, when one of her enforcers was charged with the death of an alleged informant. His body was found in Soweto near Madikizela-Mandela’s home. She was sentenced to six years in jail, but the penalty was reduced on appeal to a fine.

Madikizela-Mandela and Nelson Mandela separated in 1992, and the split grew worse when he removed her from the government cabinet three years later for alleged corruption. A year later, they divorced, at which time she changed her name to Madikizela-Mandela.

By whatever name, she, in the words of Archbishop Emeritus Desmond Tutu, “refused to be bowed by the imprisonment of her husband, the perpetual harassment of her family by security forces, detentions, bannings and banishment. … Rest in peace and rise to glory.”

Married to Nelson Mandela from 1958 to 1996, Madikizela-Mandela was actually the second of Mandela’s three wives. She remained a strong presence in his circle when he died in 2013.

Of course the Mandelas both wowed NYC when they visited soon after Nelson Mandela’s release from jail after 27 years on Robben Island. Whereas Nelson Mandela’s last visit to New York was to Riverside Church in May 2015, at an event honoring him and his work, Madikizela-Mandela last publicly came to New York in 1996, when she addressed an appreciative Nation of Islam audience at Mosque No. 7 in Harlem in 1996. She was fierce and unrepentant. She spoke with a warrior’s fire.

One of Madikizela-Mandela’s last appearances in the U.S. was in Selma, Ala. in 2010 for the 45th anniversary of the historic march. On the morning of the Martin and Coretta Scott King Unity breakfast, she told the audience, “I am truly honored to be among you. Celebrations remind us that to celebrate the present, we must revisit the past. We continue the struggle in both our nations today but it is one struggle.”

In 2016, President Jacob Zuma bestowed on Madikizela-Mandela the country’s highest honor—the Order of Luthuli—for her steadfast fight against apartheid and for democracy. And despite her differences with Nelson Mandela, she continued as a prominent official in Parliament and as a representative of the ANC.

New Yorkers added their tributes to the ongoing outpouring of love and respect.

“In my position as a representative for the International Association of Gerontology and Geriatrics at the United Nations, I often met with diplomats, ambassadors and other individuals to address concerns in Africa and to examine the manner in which NGOs were supporting the issues around their concerns,” said Dr. Juanita Carrillo, consultant in gerontology. “When we prepared for conferences and during individual discussions, every single person that I spoke with was in agreement with me as to how proud we were of Winnie Madikizela-Mandela. I believe that she was greatly influential in the disposal of apartheid in South Africa.”

As people remembered the 50th anniversary of the assassination of the Rev. Dr. Martin Luther King Jr., the Rev. Dr. Herbert Daughtry told the AmNews, “When I looked at Winnie, her shoulders were bent with the heavy burden of grief, but when our eyes met, she somehow summoned the strength to smile. I shall remember her always as a tough, courageous, audacious and no-nonsense sister, who personified the love and courage of freedom fighters through the ages, and who, through the years, while her husband was imprisoned, she became the face of the Free South Africa/Free Mandela Movement.”

“The December 12th Movement mourns with our brothers and sisters in South Africa the loss of Winnie Madikizela-Mandela,” said activist Omowale Clay. “Winnie, with singular worldwide name recognition, was a front-line soldier on the ground as her husband Nelson Mandela and other South African freedom fighter were locked in apartheid’s dungeons. She herself spent years ‘banished’ under house arrest in the battle against South African colonialism and the Western allies that backed it. Winnie’s memory will always be that of a most courageous sister who inspired us all, especially our youth, in the battle for African Liberation.”