Yanks and Mets seasons are underway, in wintery football weather 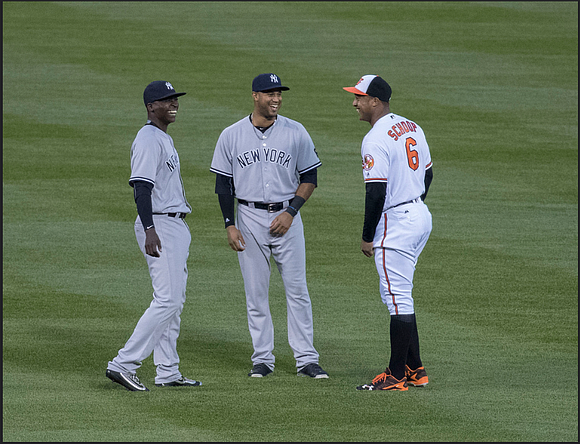 Baseball season has officially begun. The New York Yankees and Mets have officially opened up their stadiums, the Yankees against the Tampa Bay Rays up in the Bronx Tuesday afternoon after being postponed Monday because of snow. Their games were on the verge of postponement Tuesday and Wednesday afternoons also, because of cold, rainy weather. The ballpark had a sparse crowd and Opening Day ceremonies were canceled. Just getting the games played, a two-day home stand against the Tampa Bay Rays, was the focus. The season started earlier this year to give players more day offs during the season.

The Mets opened their season in Flushing Meadows in Queens at Citi Field last Thursday against the St. Louis Cardinals for three games, the first two won by the Mets. After their two games against the Philadelphia Phillies yesterday (Wednesday) and Tuesday, the Mets begin their first road trip today (Thursday). The play six games: three in Washington, D.C. against the Nationals, three in Miami against the Marlins.

The Yankees started the season on the road against the Toronto Blue Jays, a four-day, two-win, two-loss excursion for the Bronx Bombers before their Yankee Stadium home opener, an 11-4 win over Tampa, but not without obstacles and controversy.

The Yanks started the season off undermanned because of injuries to first baseman Gary Bird and outfielders Clint Frazier, Aaron Hicks and Jacoby Ellsbury. Bird had a broken bone spur on his right ankle, which will sideline him for six to eight weeks. Frazier is sidelined and day-to-day because of concussion symptoms. Ellsbury and Hicks are on the disabled list because of a hip injury and an oblique strain, respectively.

Rookie Billy McKinney, called up to replace Hicks on the second day of the season, has also been added to the Yankees DL. McKinney collided with the outfield wall in the first inning of Saturday’s game against Tampa.

The Yankees returned not only to the Bronx to play in wintry weather but also to fans and pundits already unhappy about decisions made by rookie manager Aaron Boone.

In Sunday’s game, the finale, Boone had pitcher David Robertson intentionally walk Josh Donaldson to load the bases to pitch to Justin Smoak. Smoak hit a go-ahead grand slam to emphasize the error in Boone’s decision. The Yanks lost again, 7-4.

The Mets also have a rookie manager, but their fans’ unhappiness is directed at upper management.

Yesterday’s afternoon game between the Mets and the Philadelphia Phillies featuring Mets pitcher Noah Syndergaard versus Aaron Nola could only be seen on Facebook or heard on radio, not on the usual television networks. The game was replayed on the Mets’ SNY television network last night. This game is the first of 25 major league baseball games to be shown only on Facebook this season, a deal negotiated between Major League Baseball and Facebook.