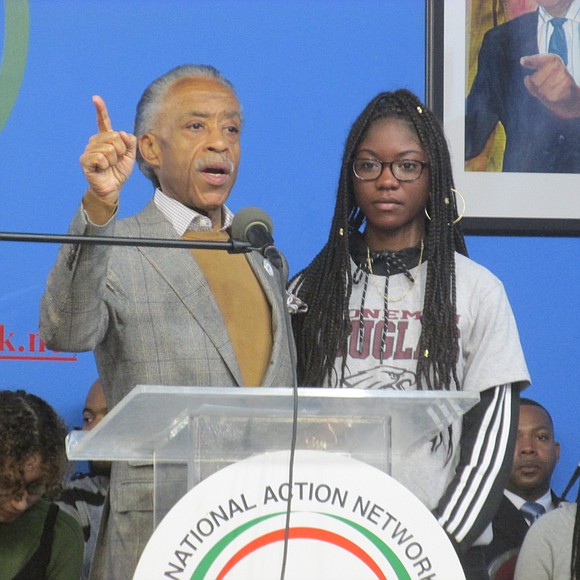 During her visit she spoke to the crowd about her life and experience since the shooting that left 17 people dead at MSD High two months ago. However, the teen said she experienced gun violence firsthand when her uncle was fatally shot 15 years ago in Brooklyn before the horrific shooting that has garnered mass media attention.

“Before Feb. 14 there have been shootings in urban communities every day and it’s gone unnoticed and nobody pays attention it,” she said. “Before I was a Parkland survivor, I was a regular Black girl and I’m still a regular Black girl. I need to speak for my people and support them because this is not only for schools but for us. We’ve dealt with this way before schools have.”

Eastmond is coming back to the city June 2 for a rally to kick off New York State’s Gun Violence Awareness Month. The march will start at Trump International Tower on Columbus Circle and end at Trump Tower of Fifth Avenue.

Black students who attend the school are voicing their frustrations with not being heard in the aftermath. Since the mass school shooting at MSD, students have become instant celebrities participating in activism nationwide, most notably the recent March for Our Lives rally that took place in Washington, D.C.

Reports surfaced that racial issues were plaguing the school before the shooting. One week before the mass murder at MSD, Black students wrote a letter published in the school’s newspaper titled “All Lives Matter” at a Black History Month program. During the presentation a teacher cut off the mic and told students to leave before the Black students finished speaking.

MSD High is 12 percent Black and is in a mostly white, affluent part of town. Although all students have been involved in sharing their stories and driving the conversation about gun violence, the faces of those telling the stories has not been diverse, according to the Black students.

America continues to see white MSD student David Hogg, who has become a regular in the media and is making major speeches at anti-gun violence rallies. Another notable item is the cover photo of the April 2 issue of Time magazine featuring MSD students—it didn’t feature one Black student.

However, one line Hogg said in a Q&A session streamed on social media caused a reaction.

“We have to use our white privilege now to make sure that all of the people that have died as a result of [gun violence] and haven’t been covered the same can now be heard,” he said.

Although many agreed with Hogg, the response from his Black classmate was simple.

“You know there are Stoneman Douglas students who could be that voice,” said 17-year-old Black student Mei-Ling Ho-shing in a recent interview. “At the end of the day, we’re all fighting the same thing. Black Lives Matter, March for Our Lives—we’re all fighting gun violence, point-blank, period.