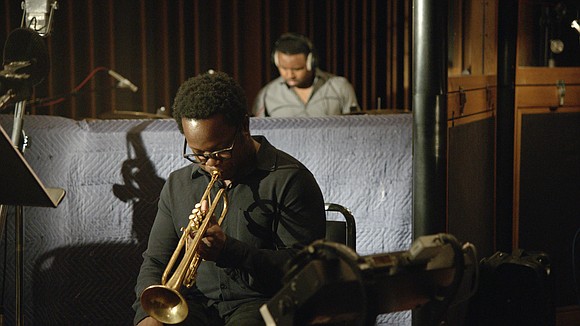 'Blue Note Records: Beyond The Notes'

This year’s Tribeca Film Festival is full of Black star power, and we’ve compiled a list of everything you should have on your radar for entertainment, including “Unbanned: The Legend of AJ1,” a vibrant documentary that tells the origin story of the Air Jordan and its impact on our culture; a powerful television documentary on the life and legacy of Trayvon Martin from executive producer Shawn “JAY-Z” Carter; “ My Africa,” narrated by Oscar winner Lupita Nyong’o; and “1000 Cut Journey,” an immersive virtual-reality experience in which the viewer becomes Michael Sterling, a Black man, encountering racism as a young child, adolescent and young adult.

On the documentary front, there are several outstanding choices, including “The Rachel Divide,” a look into the life of Rachel Dolezal who became infamous when she was unmasked as a white woman passing for Black; “Say Her Name: The Life and Death of Sandra Bland”; “Blue Note Records: Beyond the Notes,” the history of the famous label; and “The Gospel According to André,” which focuses on the life of living legend André Leon Talley and executive is produced by Oscar winner Roger

A dramatic thriller set in the fracking boomtown of Little Woods, N.D. Two estranged sisters are driven to extremes when their mother dies, leaving them with one week to pay off her mortgage. Starring Tessa Thompson.

A troubled American teenager, sent away to his mother’s native Nigeria, finds himself entangled in a dangerous web of scams and corruption with a con-artist cousin as his guide.

A journey into a Queens courtroom, where women facing prostitution charges might earn a chance at redemption, thanks to an experimental program established by a team of rebel heroines working to change the system.

Rachel Dolezal became infamous when she was unmasked as a white woman passing for Black so thoroughly that she had become the head of her local N.A.A.C.P. chapter. This documentary cuts through the very public controversy to reveal Dolezal’s motivations. A Netflix release.

In the Kenyan bush, a crackdown on ivory poaching forces a silver-tongued second-generation poacher to seek out an unlikely ally in this fly-on-the-wall look at both sides of the conservation divide.

“Say Her Name: The Life and Death of Sandra Bland”

This bold documentary goes into the life of Sandra Bland, a bright, energetic activist whose life was cut short when a traffic stop resulted in a mysterious jail cell death just three days later. “Say Her Name” follows the two-year battle to uncover the truth. An HBO release.

An intimate documentary that takes viewers beyond the television headlines and over the front lines of violence in Baltimore, and in doing so, reveals the grit and compassion of the city’s citizens, police and government officials trying to reclaim their future.

This documentary explores two musicians’ lives. One was a demon on guitar, the other was fresh out of school and no slouch on harmonica. “Satan & Adam” is a rousing celebration of the blues that comprises documentary footage shot over the course of two decades.

“Blue Note Records: Beyond the Notes”

This feature documentary looks at the history of Blue Note Records, the label that, since 1939, has recorded jazz giants ranging from Miles Davis to Robert Glasper—revolutionizing not only music but also the world. With Herbie Hancock, Wayne Shorter, Robert Glasper, Don Was and Norah Jones.

“Unbanned: The Legend of AJ1”

Directed and written by Dexton Deboree. Through interviews with Michael Jordan, Spike Lee and others, this vibrant documentary tells the origin story of the Air Jordan and the impact it had on sports, hip-hop and the birth of sneaker culture. With Spike Lee, Anthony Anderson, Chuck D, DJ Khaled, Michael Jordan, Michael B. Jordan, Jason Sudeikis, Lena Waithe and Russell Westbrook. After the movie, a musical tribute to the film and the Air Jordan will be presented by Kid Ink, Gizzle and others.

Directed by Kate Novack. An emotional feature documentary on the life of living fashion legend André Leon Talley. From the segregated South to the fashion capitals of the world, “The Gospel According to André” recounts fashion editor André Leon Talley’s storied life and career through intimate conversations, rich archival footage and testimonials from fashion luminaries, including Anna Wintour, Tom Ford and Marc Jacobs. With André Leon Talley. A Magnolia release.

Narrated by Lupita Nyong’o in Northern Kenya. The futures of wildlife and people are intertwined. Stand in the midst of a thundering wildebeest migration, witness a lioness snatch her prey—and meet a community dedicated to saving Africa’s wildlife in “My Africa.” The mixed-reality, companion experience puts participants in the shoes of a Reteti Elephant Sanctuary keeper caring for the newest arrival, a baby elephant named Dudu.

In this immersive virtual-reality experience, the viewer becomes Michael Sterling, a Black man, encountering racism as a young child, adolescent and young adult.

Executive Producers, Shawn “Jay-Z” Carter. This film depicts the life and legacy of Trayvon Martin, presenting the definitive look at one of the most talked-about, controversial events of the last decade.