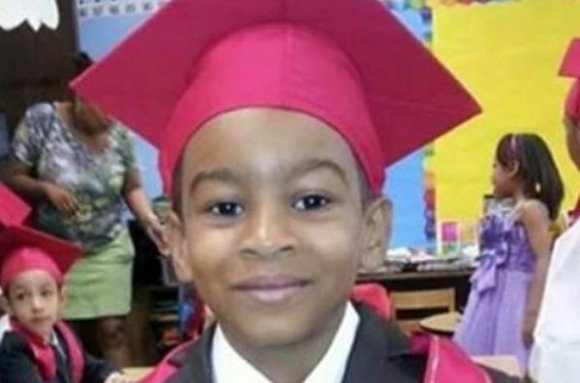 A man faces 50 years to life in prison after a jury found him guilty of a 2014 stabbing of two children, leaving one dead in a Brooklyn elevator.

“God is good,” PJ’s mom, Arika McClinton, said outside of the courtroom. “We got a guilty verdict. PJ can now rest in peace, and Mikayla can now live her life to the fullest as best she can. Let the Lord have all the praise. Give God all the glory.”

Avitto and Capers were on their way to get ice cream in June 2014 when St. Hubert stabbed them in an elevator at the Boulevard Houses in East New York, Brooklyn. The jury deliberated for two days, according to reports.

During the trial Capers, now 11, testified about the incident in which she witnessed Avitto’s killing. Family members were outraged when lawyers called the girl “delusional” and said that she was a “pathological liar.”

“It is impossible to fathom that someone would brutally stab small, innocent children who were going to get some icees after playing in a playground,” Brooklyn District Attorney Eric Gonzalez said in a statement. “But the evidence established beyond any doubt that the defendant committed this heinous crime and he has now been held responsible.”

Shortly after the killing, the New York City Housing Authority installed security cameras to Boulevard Houses and 49 other developments in 2014.

The killing put a spotlight on criminals with mental health issues. St. Hubert was diagnosed with paranoid schizophrenia in 2009 after he attempted to strangle his mother. Family members said he was given no medication or therapy when he was incarcerated.

At the time of his arrest in 2014, St. Hubert said, “Satan has powers and controls things.” However, he also said, “I think I need a lawyer,” raising questions about his mental health condition.

“If he’s sick, it’s not his fault,” said St. Hubert’s mother, Marie Bauzile, in 2014. “I forgive him for what he did to me because it’s not something he can control.”

At the time, several community activists doubted that St. Hubert was suffering from schizophrenia. A.T. Mitchell of Man Up, Inc. believed St. Hubert had a clear understanding of what he was doing.

“I don’t buy the case that he is mentally disturbed,” he said. “Obviously he plotted on these kids. It was not something sporadic or out of his control.”

St. Hubert’s lawyers say they plan to appeal the conviction.