32BJ and CWA pull away from Working Families Party 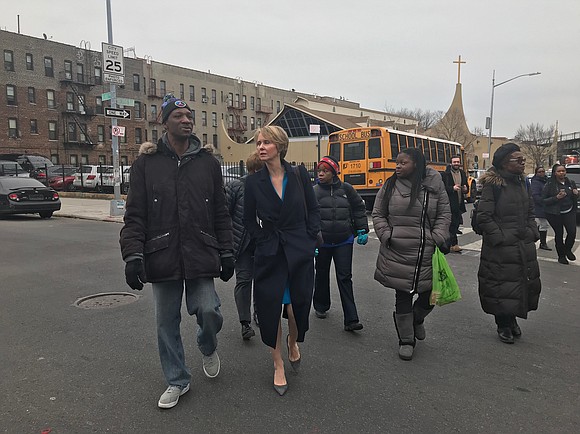 “WFP activists and voters are the heart and soul of our movement to make New York a place that belongs to all of us—a place with great schools for every child, good jobs, health care for all and an end to mass incarceration,” said Nixon in a statement celebrating the endorsement that her people have labeled a “blow to Cuomo.”

WFP’s move didn’t sit well with some labor unions and their leaders.

In a joint statement, 32BJ SEIU President Héctor Figueroa and Communications Workers of America Local 1 Vice President Dennis Trainor said that the tents of the Working Families Party leave them no choice but to break ranks and support Cuomo.

“The Working Families Party (WFP) was created by labor unions, community organizations and progressive activists to advance an agenda and elect candidates who improve the lives of working people,” read the statement. “From raising the minimum wage to $15 an hour, to passing the strongest paid family leave program in the country, Gov. Cuomo has delivered on that agenda.”

“The latest developments show that the current leadership of the WFP disagrees with that approach, and we have been unable to convince them otherwise,” concluded the statement.

When asked about labor unions leaving his stead, Working Family Party Founder Bill Lipton said that they’ll continue to support labor and feel that the current governor has violated his own principles and promises.

“WFP won’t ever stop supporting unions and the right to organize and win fair contracts,” said Lipton. “When Andrew Cuomo was first elected he vowed in The New York Times to wage an offensive to tame the power of labor. And he did. It was called the Committee to Save NY and it raised millions of dollars from real estate and gambling interests. And then Cuomo passed Tier 6, so-called ‘pension reform’ which will devastate public workers’ retirement income.”

In 2012, New York State legislators passed pension reform that would allegedly save the state $80 billion over the next 30 years. According to Lipton, these savings come at the expense of newly hired state and local public workers who would see their benefits reduced.

Héctor Figueroa, president of 32BJ SEIU, said his union’s decision to leave the party over their Nixon endorsement shouldn’t shock Lipton and company.

He stated, “Our decision to leave the Working Families Party (WFP) shouldn’t have come as a surprise to the leadership of the party. Contrary to statements made by WFP officials, we were not forced to make this decision. This has been determined by what we consider is in the best interests of working New Yorkers coming into this election. We fundamentally believe that endorsing Andrew Cuomo is the right thing to do in this election and for the future of the party.”

But none of that matters to United Federation of Teachers President Michael Mulgrew, who had some choice words for Lipton. He accused him of abandoning the principles that made the party he founded a major player in New York politics.

“Mr. Lipton is misguided and delusional if he believes the Working Families Party still represents the voices of labor and working people in New York,” said Mulgrew in a statement. “We walked away years ago when it became evident that their focus was on personal political agendas and a few egos. When asked to behave responsibly, they react like children throwing a tantrum in the classroom.”

Lipton said that he’s sticking to the agenda that he believes helps working New Yorkers.

“The mission of the WFP is to fight for working families in unions as well as those who don’t have the protection of a union. That means also fighting for criminal justice reform, the rights of immigrants, women’s equality, affordable housing and fixing our broken campaign finance and voting systems.”

He also took another dig at the current governor.

“By prioritizing his wealthy donors over the rest of us and keeping the Senate Republicans in power for eight years, he has blocked us from progress on all these issues and more,” said Lipton. “Cynthia Nixon, a union member since she was 12 years old, has the values and character we need to lead this state and will fight for working families from day one.”