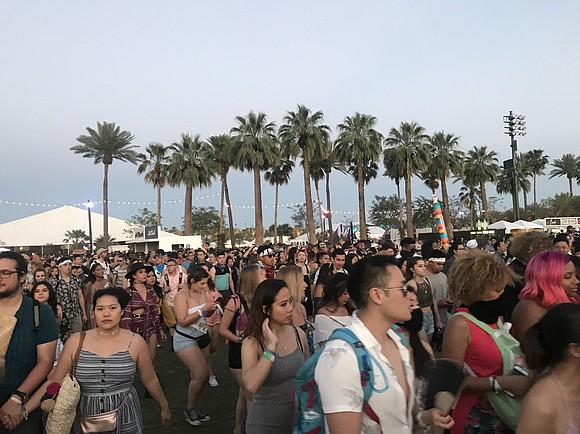 She sneaks off stage to make the first of many outfit changes, while the dancers from earlier entertain the crowd with majorette-style moves. When Beyoncé returns to the stage she’s in a more relaxed outfit: cutoff shorts, rhinestone-fringe boots and a yellow hoodie with a fictional college crest plastered across it. She assumes her position, takes in the crowd, allows for the marching band to slow down, and then begins similar majorette-style choreography to the beats of the band. It’s not long before trumpets take the lead and the recognizable tune of “Crazy in Love,” her first single as a solo artist, begins.

For the next two hours, the mother of three treated festivalgoers —most of whom were white upper-class kids that have hardly been to the South, let alone an HBCU— to some of the greatest and most entertaining traditions in Black culture. She interwove her most popular chart toppers and one-liners with the traditional chanting style used by sororities and fraternities. They were given a taste of what energy at events such as probates, step shows, battle of the bands or HBCU classics feels like through a few comical skits and a lot of music.

Although the amount of vigor needed to perform at that level for that long is impressive enough, what I most respected from Beyoncé’s performance (and the reason I think this performance truly will be considered historic) was her boldness. She was given the opportunity to become the first Black female to headline this event, and so she forcefully accentuated her Blackness. Although most would have tried to tone down their Blackness to be accepted more by the audience that they were being paid to entertain, Beyoncé toned hers all the way up.

Even her mother worried that Coachella might not be the stage to reveal such a culturally influenced show. Tina Knowles-Lawson revealed on Instagram that once she expressed her concerns to her daughter, Beyoncé replied, “I have worked very hard to get to the point where I have a true voice, and at this point in my life and my career, I have a responsibility to do what’s best for the world and not what is most popular.” It’s that kind of boldness that Black culture needs. The kind of boldness that is never afraid to showcase our gifts, no matter who or how many may be watching.