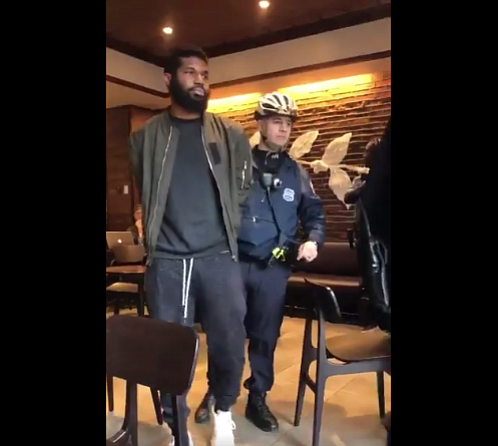 Black man being arrested at Starbucks in Philadelphia Twitter/@missydepino

Fallout continues after two Black men were arrested for sitting in a Philadelphia Starbucks. Calls for a boycott of the chain coffee shop persist as the company announces plans to close thousands of stores for racial bias training.

April 12, two Black men entered the Starbucks location in Philadelphia’s Rittenhouse Square neighborhood. The men reportedly asked staff if they could use the restroom. An employee refused them, stating that only paying customers could use the restroom. The men then sat at a table and waited for a friend to arrive without buying anything. Police were called and the two were arrested for trespassing.

Viral video of the incident was taken by patrons inside the Starbucks and viewed more than 10 million times on Twitter. Several white customers, including the friend the two Black men were waiting for, questioned police during the arrests. The men were not charged.

“What did they [police] get called for?” the white friend asked. “Two Black guys sitting here meeting me?”

Reaction to the arrest was immediate, with protests taking place at the location and activist calling for a boycott of the coffee chain.

Starbucks CEO Kevin Johnson said in a televised interview that what happened was not in-line with the company’s values and offered a public apology to the two Black men.

“I’ll say the circumstances surrounding the incident and the outcome at our store on Thursday were reprehensible,” Johnson said. “They were wrong, and for that, I personally apologize to the gentlemen that visited our store.”

In a statement released by Starbucks Tuesday, Johnson met with the men and apologized to them. They also “engaged in constructive discussions” about the issue of racial bias around the country.

The AmNews reached out to officials at Starbucks and did not receive a response at press time.

Reports indicate that the manager who called the police on the Black men is no longer with company, and Starbucks announced it is closing all 8,000 of its stores nationwide May 29 for racial-bias training.

“I can tell you candidly these officers did a service they were called to do,” he said, adding that the officers were told the men refused to leave after management at the Starbucks told them to vacate.

Demonstrations were held in Philadelphia at other locations. One notable demonstration took place at two Starbucks at City Center where Philadelphians Organized to Witness Empower and Rebuild staged sit-ins.

“The outrage is that even though the situation has occurred and even though everyone says over and over, ‘We apologize, we are sorry,’ except for our police commissioner, the simple fact is that Starbucks, as part of its business model, looks for areas that are gentrified … to be a safe haven,” said the Rev. Gregory Holston, POWER executive director. “A safe haven to who? Certainly not to two African-American men who were sitting there last Thursday.”

NAACP President and CEO Derrick Johnson said in a statement that the Starbucks incident sheds light on a problem Black Americans deal with too often.

“The Starbucks situation provides dangerous insight regarding the failure of our nation to take implicit bias seriously,” he said. “We refuse to believe that our unconscious bias—he racism we are often unaware of—can and does make its way into our actions and policies.”

Activist around the country are calling for Blacks to boycott Starbucks in the wake of the latest controversy. As part of a “boycott and replace” call, there has also been a call to support Black-owned coffee shops. A list of 47 Black owned coffee shops was published on the website shoppeblack.us.