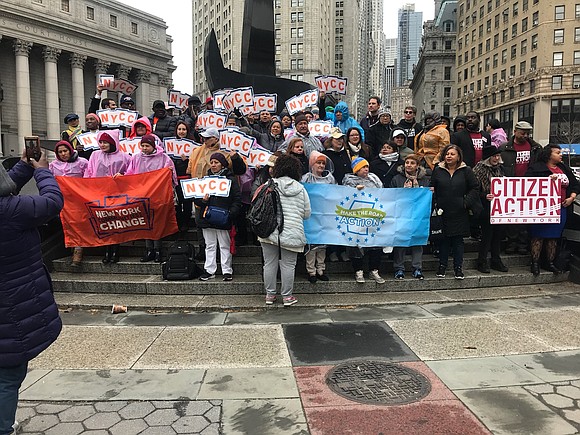 Marilyn Mendoza, member of Make the Road Action, said, “I’m here today to show Gov. Cuomo that we won’t let him intimidate us.”

She continued, “Our organization fights for the needs and rights of immigrants and working-class New Yorkers, and we help create the power our community needs to defeat the Trump agenda and protect our families. Threats won’t stop us.

We will keep fighting for the good of our community.”

Two unions, 32BJ SEIU and the Communication Workers of America, left the Working Families Party after they endorsed Cuomo’s primary challenger Cynthia Nixon for governor. As a result, the governor has allegedly urged progressive groups to stop giving money to any organization that supports Nixon. Some union leaders, according to reports, have threatened to start a new progressive party aimed at garnering support for the current governor.

According to the New York Post, Cuomo pulled the pro-Nixon organizations’ 990 tax forms with the intent to attack them. These groups, however, have made a public display of staying true to what they hold dear and said they’ll continue to fight for things such as equitable public school funding, stronger rent laws and the passing of the DREAM act.

“These community organizations are the frontline of resistance against Trump,” stated New York Working Families Party Director Bill Lipton. “Every day they do the hard work fighting deportations, evictions, unsafe housing conditions and more. WFP is proud to stand in solidarity with our community leaders in their fight against these threats and for a New York that includes all of us.”

“It is despicable that the Democratic governor in New York is now trying to destroy community organizations in our state,” added Marie Pierre, chair of NY Communities for Change, in a statement. “We will not back down in the face of these threats, and we will continue to fight for affordable housing, good jobs and a better life for all New Yorkers.”

The support for Nixon and her platform has led to Cuomo embracing policies that his detractors have advocated for, such as granting parolees the right to vote or banning plastic bags.

After news of Cuomo’s threats to community groups surfaced, a Nixon representative put out a statement that read, “Andrew Cuomo putting his personal political ambitions over the needs of grassroots organizations fighting for racial and economic justice tells you everything you need to know about him. And it shows just how terrified he is of Cynthia Nixon.”

Joseph Mpa, board member of Community Voices Heard Power!, said that the governor revealed his true self this month.

“Frontline communities will not be bullied into submission at the expense of our bold member and member-leaders that place their livelihoods on the line by speaking truth to power, demanding change and building real power in their communities,” Mpa stated.