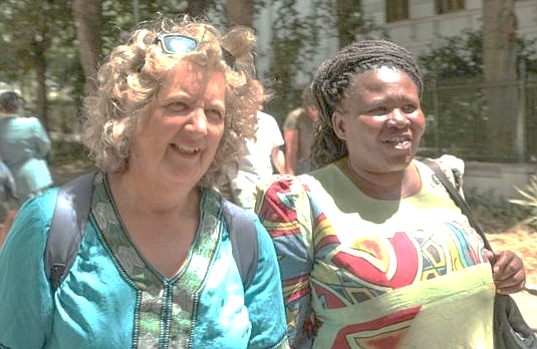 The women, Makoma Lekalakala and Liziwe McDaid, waged a five-year court battle against the plants. Against all odds, including a secret agreement between Russian leader Vladimir Putin and former President Jacob Zuma, a high court ruled with the women, finding the deals unlawful and unconstitutional—a victory that protects South Africa from a dangerous expansion of the nuclear industry and production of radioactive waste.

This week, international judges of the prestigious Goldman Environment Prize tapped Lekalakala and McDaid as two of their winners from six continents.

“Both of us grew up in the 1970s and 1980s, and we made a commitment then to challenge any injustices taking place,” Lekalakala told the BBC. “We need to protect our hard-won gains and rights.”

McDaid called their victory just a step on the path to a nuclear-free South Africa, stating, “Success would be for our one existing plant to be decommissioned and for the government to make a nuclear-free declaration.”

The court ruling means that any future nuclear proposals must first be passed in parliament and opened up to the public.

Also capturing the Goldman prize was LeeAnne Walters, who led a citizens’ movement that exposed the Flint, Mich. water crisis. Testing results showed that one in six homes—affecting more than 100,000 residents—had lead levels in water between seven and 800 times the legal limit, far exceeding the EPA’s safety threshold.

Walters’ persistence compelled the government to take action. However, a recent move to end free bottled water before all lead pipes are replaced has infuriated Flint residents.

Others winners of the global award include Francia Márquez, a leader of the Afro-Colombian community who organized local women to end the clear-cutting of forests and contamination of water by illegal miners with backhoes. The mountainous area of La Cauca is home to a quarter million Afro-Colombians, many who have resided there since the days of the slave trade.

With Afro-Columbian music as part of her political expression, she challenged illegal mining, leading a 10-day, 200-mile march of 80 women to the nation’s capital.

For more information on the Prize winners, visit www.goldmanprize.org.