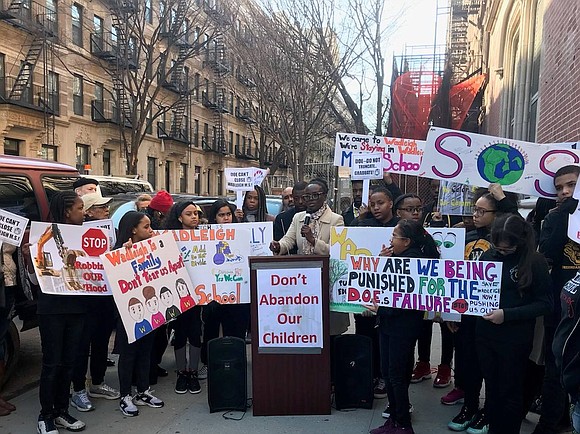 The fear of a long-standing Harlem institution closing subsided this week.

Students and administrators at the Wadleigh Secondary School for the Performing & Visual Arts middle school learned that their second home was taken off the list of schools slated to be closed. However, the Panel for Educational Policy, the group that was scheduled to vote on Wadleigh’s fate Wednesday, said they plan to combine the middle school with another district middle school in the building.

It’s the first time new Schools Chancellor Richard Carranza waded into the waters of policy since taking over from Carmen Fariña.

The merging of Wadleigh and Frederick Douglass Academy II middle school grades is slated to take place at the beginning of the 2019-20 school year. Starting this fall, the schools will start sharing resources and professional development for staff members.

“It’s also synonymous with Harlem,” Benjamin said. “When you think of preserving Harlem, you think about preserving Wadleigh. The new chancellor was very clear with his goal during his meeting with us. He wants to work with the community.”

According to Cordell Cleare, district leader of the 70th Assembly District, elected officials had a meeting with New York City Mayor Bill de Blasio last week and were told that there would be a decision on Wadleigh in the coming days. Although rumors swirled among parents, administrators and others about Wadleigh being safe from the chopping block, Cleare said she didn’t want to get her hopes up.

“I’m from Harlem, but I have roots in Missouri because I’m a ‘show me’ kind of person,” explained Cleare. “There was a lot of word-of-mouth or rumors. I checked the agenda every day looking for that listing to come off. One day, I saw it was off the agenda with a line through it.”

She emphasized, “I had to hear it from the horse’s mouth.” But Cleare is still leery of the process and wants to make sure that there is indeed a collaboration between the two schools in the building and not an actual merger of the two schools. “Collaboration of best practices is fine, but merging these two school would be a disservice to the entire community,” she stated.

Wadleigh’s fate has swayed back and forth since the late 1980s/early 1990s—school closures or threats of school closures followed by concerted efforts to save the school. It has been targeted for closure twice this decade alone. Once in 2011, which involved an effort led by the likes of Cornel West to save it, and last December when it was included on Fariña’s list of schools to either close outright or be truncated. This time, a mass effort from elected officials, the community and organizations such as the NAACP help stymie a defeat.

Dolores Roberts, an alum of Wadleigh who also sent her children there and now works there, said that there was a time where Wadleigh had to fight for basic infrastructure. Now, she wants more funding and better leadership for the school.

“In terms of having leadership, we gotta have some kind of trust level,” said Roberts. “We have to have leadership that connects us. We have to have people who’ll be held accountable who establish a relationship of trust.”

Benjamin concurred and said that money isn’t the only thing needed to help Wadleigh.

“Funding is paramount, but there needs to be the right leadership or it doesn’t work,” he emphasized. “The middle school needs a strong principal who’ll focus on the arts as much as math, ELA and other academics. They have to get together with the community and evaluate what can be done.”

“More importantly getting the right resources to make Wadleigh the state of the art institution our children deserve is paramount to the future of our community,” Cleare stated.

Roberts said that the DOE has a lot of work to do to get back on the good side of people like her.

“People are skeptical right about now,” said Roberts. “We have to take care of our babies. They’ve been ruined. A week before Christmas, you tell them their second home is closing?”

“A lot of trust has been damaged because of this situation,” continued Roberts. “Praise the chancellor for looking at everything with clear eyes.”